Since the non-beta android seems to have become unusable (half of items not loaded in app, only on website), I gave the beta another (third) try.

The only critical issue I have is that Offline Mode is off by default and I have not managed to enable it:

Canvas area still unclear, as mentioned by other users too. A slightly different shade for the buttons area might already fix this.

Back button in a strange place and invisible when you need it, as mentioned by other users too.

Counter is not updated during study sessions. I.e.: you get your queue down to 0, go back to dashboard and see that the queue is not 0.

Settings are not all properly transferred to the beta; for example goal mode setting goes back to its default ON.

And then this one came along: 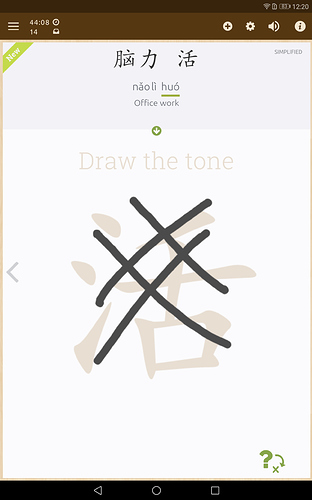 I cannot progress beyond the tone part, and the only solution was to ban the item entirely.

Thanks for the follow up! The next update focuses on the SRS and should eliminate the item looping issue. It’s also MUCH faster than the build you’re using. It feels faster than the original iOS app! The UI has been greatly updated as well.

We’re working to get the next update out soon and we hope it addresses everything you’ve been running into.

The slowness is a resource leak of some description. It gets worse every time you leave the study page and return. The workaround is to kill the app before you go back to the study screen each time.

trying for a couple days the beta. running Android 8.0 on a Samsung S8+.
i ran the normal android app a few days before.

for me the program is mostly unusable at the moment.
just starting. pickup skritter 101 list.
i got the same characters over and over. even when flagging them too easy.
after around 9 characters/words the yi (one) character shows up and when i answered and then click the next arrow the program/study freeze, with the holding loop animation on the top right corner.
Only solution outside of restarting application is to click back on dashboard, then study.
Did that at least ten times. some news characters/words appears, but never twice. only the same basic ones, very well known, and after some times a new word added. And then yi appears and i need to relaunch study …
(I banned yi… yi still appeared after 2chars (?) but didn’t bugged… then after a few more chars app froze on ren (people) … ) hopeless

After app uninstall and reinstall (initially willing to install “normal” app) this behavior disappeared, then got a bunch of new words like it should…

Otherwise the features on the mobile app are really cool.

Despite all those critics and suggestions, (but that what a beta program expect i guess?) i found u did a great job overall feature wise. And the the info panel / pleco integration and various options are very nice too.

Outside of the beta, the normal version seemed pretty unstable with looping/repetition characters too … or so it felt

As a customer or future customer, I must say i feel VERY disappointed.
i definitely see the value on skritter and i love it, but i don’t intend to use it on the website only the mobile one… and i feel both mobile apps are unfinished despite showing big potential.

my trial 7 days will end, and i would feel outrageous to pay for the current mobile version.
As long as i don’t use the web one, which i believe stable, i don’t feel right to pay for this.
Also if my trial expires, i would appreciate a form of alert system /mail to warn users when the app is good to use (and i mean really …) and/or notifications when new applications versions are launched.
i love skritter for what i saw, but i’m not going to run the app until fixed, and i would appreciate email notifications of app updates to check new versions.
i would go with a 6 month or 1 year subscription asap if stable.
Right now this is not right and the subscription is poorly adjusted to that

Thanks for your feedback

edit : i saw the reply you (jeremy) made yesterday regarding repetion on 2.35
the stuck issue is different, but i share the concern on repetion.
i will switch back to normal and give it another try.
but the alert part on version and maybe an sticky forum message with your intended roadmap would help (i understand u can’t commit on next version ETA, but a rough idea to know if we’re talking about waiting days or weeks/month before next release )
Also would going to non beta be fine enough or would you recommend trying the old version ?
per jake post : https://files.skritter.com/android/ (version 2.12 i imagine)
… opt out option for beta not displayed on 2.3.5… hard to leave. (reinstalled 2.1.2 from previous link to get to the google page and opt out …) should bring back the beta link on the account page in 2.3.5

Thanks for taking the time to let us know how things have been going on your end. (And for your follow up!)
It looks like you’ve spotted the info about the next update focusing on scheduling / repetition, however apologies in the meantime for any inconveniences you’re still running into. The next update is planned sometime for mid June!