I know that tones can often be dropped in spoken Chinese, for example 嘮叨lao2dao1 becomes lao2dao. The problem I’m having is that Skritter always uses the latter. I’m a Chinese language student and all of my textbooks use original tones and my tests also require me to give the original pinyin. This makes using Skritter very frustrating as I have to constantly go back to my textbook or elsewhere to find the original tones. There should be an option in the settings to show original tones. Or does this option already exist? 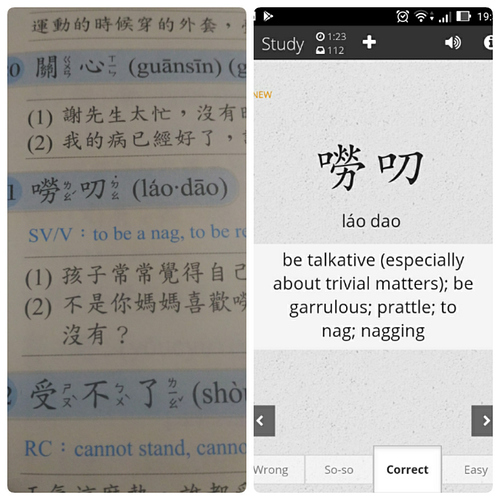 Skritter unfortunately doesn’t support multiple pronunciations for multi character words. For someone who studies in Taiwan it can be frustrating, however we recommend adding any extra pronunciations to either the definition/mnemonics to include it for in the meantime while there isn’t support. In the future, we would want to create a separate database for taiwan pronunciations which could be toggled on.

This wouldn’t be able to be tackled until 2.0 has matured and the Android 2.0 app (and 2.0 iOS app) are no longer in beta. Though it’s getting closer every day, it’s still a bit far off to be able to accurately predict. I recommend putting the alternate pronunciations into the mnemonics area in the meantime as a workaround-- you could alternatively put them into the definitions field instead, though that would give away the reading in the definition opposed to being hidden in the mnemonics field until revealed.

I don’t remember how this works on the old app, but in the 2.0 version if you pull up the info tab on an item and look at the “characters contained” section, it shows the individual characters and their meanings, with the original tones. It’s an extra click, but it saves a trip to the textbook. 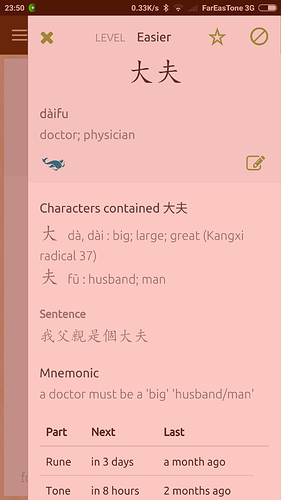 Thanks. That’s so helpful