I have a weird problem where, whenever the app hits this word in my reviews:

If you need me to take a video, I can send it to you. For the time being, it’s rendering the app unusable. The only workaround I can think of is to ban this word from my list, but I’m not sure if I will just experience the behavior again with another word…

whoa. That doesn’t sound fun. @Jeremy will investigate, although it is possible we’ve already addressed the issue in internal builds already as we’ve been cleaning up some things on the Japanese betas. We’ll let you know if we need more info from ya. You might try banning at least for now. You can always unban later once we confirm a fix for it

A smaller note: I don’t like that auto-play doesn’t stop when you press the Info button. It does in Current Skritter, so that seems like a loss in New Skritter. As a user, I should be able to click the Info button and study the characters in greater depth before I’m automatically advanced to the next character. I know I could work around this by disabling auto-advance, but having to explicitly confirm every single kanji in a 四字熟語 makes me want to study the characters for 切腹.

Info button not stopping auto-advance was not the intended behavior. Whoops!

We just patched it up for 3.0.8 release so that it doesn’t do that anymore. The latest update should be rolling out to all platforms before the end of the day. Google updates take a few hours from the time of submission and Apple needs to review the app after each round of changes, but they’ve been pretty quick thus far.

Sorry about that one!

@Jay_Andrew_Allen I’ve run into this exact issue on previous builds, however haven’t seen it recently. Which version of the beta are you running? (You can check at the bottom of the menu on the left side by tapping the menu icon in the upper left corner of the dashboard).

Ah, after you update to 3.0.8 I recommend unbanning the item which should hopefully no longer be presenting a problem!

I just downloaded 3.0.8 (300040) and unbanned 訝しげ. The problem still exists - Skritter freaks out and I can’t advance. I had to ban the word again.

Also looks like none of the inline graphics aren’t displaying in this update- looks like the lookup string in the resource file is being displayed directly instead of the corresponding icon. E.g., the “new” icon for new words doesn’t show up; instead, I see the word “fiber_new”. This is what my flyout menu looks like (attached).

Hmmm, graphic didn’t attach. You can see it here: 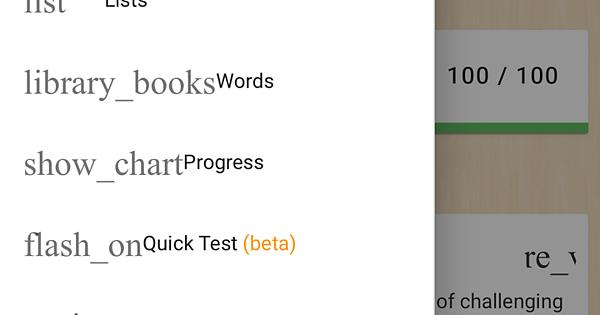 I see it too. Thanks for the image upload! A restart of the app appeared to fix the issue, but we’ll certainly dig into the root cause. Not sure how we missed that. Does app restart do the trick for you?

As for the word, @Jeremy … we still got an issue with it. Help please!

Yes app restart did the trick on the images - thanks!

One last question (for now

- is Quick Test ready to test? I can’t get it to work at all; it never saves the words I attempt to add to it, so I never get to practice anything. I’ve been really looking forward to this feature.

One last question (for now

- is Quick Test ready to test? I can’t get it to work at all; it never saves the words I attempt to add to it, so I never get to practice anything. I’ve been really looking forward to this feature.

We’ll try and reply in the feedback post you made (thanks, btw!) as soon as we can. I just wanna keep this post on topic for this issue so we can mark as closed when fixed

It turns out 訝 isn’t mapped in the system for writing! I recommend keeping the word writing banned in the meantime until the app can handle the writing for this word. Sorry about that, but it feels good to get to the bottom of the issue. To be clear, 訝 can’t be written on the website at the moment either.

We’re working on getting the new character editor up and running at some point in the future and this kanji is on the list for when we do!