We’ve submitted 3.5.4 (300447) beta builds to Android and Apple and they’re waiting for review at the time of posting this.

Here are some things to keep an eye out for in the builds. 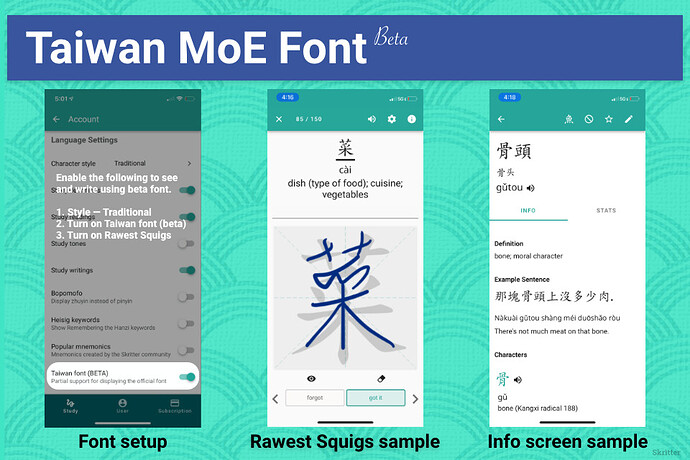 What to test for
Mostly general testing for this particular build. Deck section scroll position is improved a bit when entering and exiting words and deck sections.

If you’re studying Traditional Chinese characters you should certainly give the new Taiwan font (BETA) a spin. Turning this toggle on will load the Taiwan MoE KaiTi font from the web inside the app, and replace all instances of the character on study cards, and the Info screen.

Because the font doesn’t line up with our stroke order hints we’ve intentionally removed the “trace the stroke” card from the learning flow to reduce stress.

@Farham @Apomixis this beta should make studying a single item from a deck section a bit more pleasant for ya.

Thanks a lot! It’s much appreciated and looking forward to it!

Things worth checking out in the build:

Note: We use “Mark all complete” in internal testing, and we’re keeping this in the build as an experiment. We’ll be monitoring datastore costs and everything else to see if we can sustain the feature on the v0 API. If it ends up choking our server, and blocking people from adding items the normal way for some reason we’ll have to pull support and circle back to this (along with more controlled bulk-adding) in the future on the v3 API.

I think I’ve reported this issue earlier, and it hadn’t shown up for a while, but it’s happened again (latest android beta) -

We’ve reverted a change that was causing issues with this, but it should be working now!