We’re rolling out a huge beta update to iOS and Android today. Here are some detailed notes on what’s included in the build and what to be on the lookout for.

What’s in the build:

Note: This update should force a fresh download of all of your data in order to calculate your active study streak, total days learned, and more! 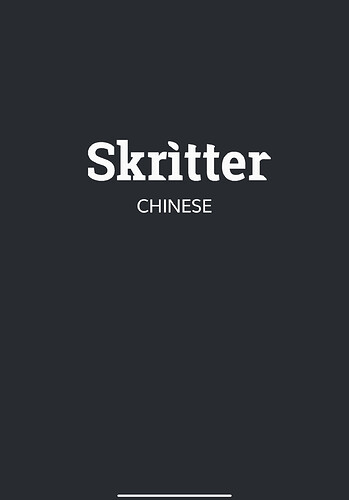 Fresh install of Skritter as well? I’ll try and upgrade my iPads for 14.6 right now and see if we can figure things out. We’re forcing a full refresh of your data and have only tested it on a few accounts so far.

As for feedback, I see your email but using TestFlight to reply and have a back-and-forth sucks. Feel free to post in this thread if you’d like to keep a dialogue going.

This was a TestFlight pull on top of the prior production Skritter. I’ll delete the whole app and try TestFlight again.

Thanks for the details. We’ll try that stuff out, too!

Okay, after a Full-app-deletion of Skritter, the test flight install did launch correctly and had me re-authenticate and login and redownloaded the data.

Roger that. Sounds like that’ll be the SOP if we can’t find a quick fix.

Thanks for being beta testers, y’all. Also, happy streaking 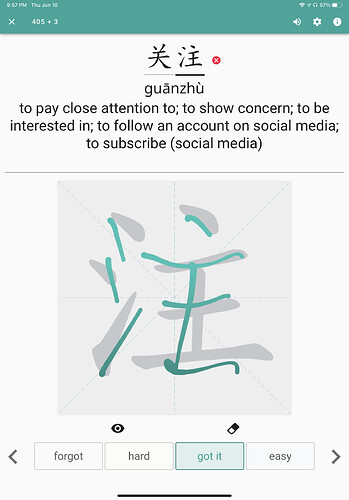 Everything after the + button should be the total incorrect cards for the session. If you keep studying until the end it’ll add them to the end of the total due cards and bypass the report screen.

Looks like word-level grading isn’t correctly adding or removing those items from the pile. I thought I tested that stuff this morning, but I clearly missed it–nice catch!

The good news is the cards you’ve marked wrong will just be due in the next batch for now. We’ll get it fixed up.

Thanks for the report!

Patch update rolling out. Contains a fix for word-level grading, and the splash screen loading issue for anyone that hasn’t used the app yet, along with a few other minors fixes.

I’ve been playing around with the app, the progress tab is indeed much more useful now. If I remember correctly, there are three new metrics that are shown for the first time in the app: Unique characters, longest streak and overall retention. The first two I understand, but would you mind explaining a little bit about the Overall Retention metric or guiding me to where I can find information about it?

On another topic, I think it would be more useful if the graph just below the total words shows labels for the x-axis. I assume the data starts from the first day I used Skritter until now, but it’d be nice to have the months maybe as reference.

Agreed on the graph x-axis/time-axis! That it was “missing” was the first thing I noticed on that screen.

@Junwei1509 @Apomixis indeed a bit confusing without any axis for reference. I can’t remember if there was a reason we left it out or if it was just an oversight, but it’s supposed to be just a general trend of all the words you’ve learned from the start of your Skritter journey. In the original mockups we did have a start/end dates on the x-axis and I’ll see about getting those back into the next update.

Definitely a performance hit when drawing with the latest version. I turned the graphics quality down to medium which improved it but I’m still getting delays that weren’t there before.

are you on raw or rawest squigs? Or are you seeing a hit overall? What device are you studying on?

We’re still working on improving the performance of the canvas and hope to have the kinks sorted out before production release!

There are some minor delays between screens. Up to several seconds from finishing review to the review report in particular, but other than that it’s only on the canvas that is really an issue. Although the usual delays while syncing could be masking other slow downs.

I’m using a Galaxy Tab S5e. As chance would have it I received an OS update this morning (to Android 11) which has helped considerably. There are still clear steps between skritter grading the squigs and drawing the character underneath it for example (probably subsecond but quite noticeable) but not many instances where individual stroke renders can be seen as separate. On medium graphics it’s usable now.

Given the improvement, I tried turning the graphics back to high and it’s not nearly as bad as yesterday but there’s still clearly an issue. Delays where I don’t see what I’m expecting so I start again just as it appears, or I find myself pausing all the time (subsecond) waiting for the rendering. Quite annoying to use.

I don’t usually use my phone (Oppo CPH1611, Android 6.0.1) for writing practice due to the canvas size but I tried it this morning and although it’s not nearly as bad there are
definitely the same performance issues. It seems to get worse as I go and for some characters it didn’t render the squigs until a couple of strokes after I made them. (All on high graphics. On medium graphics on the phone the delays are barely noticeable - even then only because I’m looking for them.)

I will send a private message to @SkritterJake with a link to a Google Drive video that exhibits the problem.

If you watch the video at 10 seconds you’ll see that I hit the green OK button and as soon as the green button lights up, the correct characters appear on the screen instantaneously.

But if you look at 20 seconds and 40 seconds into the video you will see that in the video the green OK button lights up but the characters aren’t immediately drawn, and have a delay. In fact at 40 seconds you can see the characters get partially drawn on the left side and then get drawn completely on the right side with a delay.

I never noticed this delay after hitting the grading buttons on any of the prior Skritter versions before the beta (300508).

I shut down all apps and rebooted the iPad, but that did not help.

Edit: I turned the graphics quality down to medium and I turned off fancy teaching mode and turned animation speed to default, but neither of those had any impact on the delay that I was seeing

After playing with the beta for a few hours, I gave up and reverted back to production. The delays/lags I’m seeing are too distracting.

Oddly, it appears that my progress has reverted back to what it was prior to trying the beta. My number of due cards in the production app does not match what was in the beta app, and the cards that I’m seeing are the ones that I was seeing when I first started the beta a couple days ago. So that was not something I expected.

But it doesn’t feel that the beta is ready for mainstream. There are still too many glitches in both the drawing and the rendering that make it too distracting and I’d much rather just use the production than what the current beta is doing.

Edit: After using the production version for just 10 minutes, I am so happy I reverted. Production is snappy and fast and clean. The beta definitely feels like a downgrade for the base use case of writing reviews.

Edit 2: production Skritter is definitely having me do all of the reviews again that I had done for the beta over the past two days, in the same order. After finishing those, I am now doing the same Reviews that I did earlier today on the beta.

I’ve noticed the same drawing lagginess others have, which was helped somewhat by adjusting graphics quality to medium.

However I am finding syncing and review count to be problematic. For example, I am running the beta on an iPad (primary Skritter device) and also an iPhone. This morning the iPad showed ~150 cards due, while the iPhone showed ~295 (sorry I cannot recall the exact count), even after a fresh sync of both devices.

I tried to finish a Due Cards session this morning on the iPad, but no matter what I do there are the same 2 cards stuck as due, even though I’ve gotten them correct multiple times. Now the iPad reports 2 cards due (no way to clear) and the iPad reports 295 cards due.