My favorite way to use Skritter is to copy and paste words into Excel that I come across while reading and then to go back later and add them to Skritter. In an adjacent column to the words, I write the sentence that the word was from when I cam across it.

It is very easy for me to add many new words at once to Skritter by just copying and pasting the column with the words in it. However, it is not easy to quickly add all of my example sentences at once. The only way I can do it is to go through individually and add the sample sentence to each word individually.

Any suggestions how to expedite this process?

Currently that would be the fastest way of accomplishing your goal, however you could add the sentences as items (instead of linked to the word as an example sentence) to be able to study them including writing.

OK, I went through and added all of the sentences individually but now I see that they’re not showing on the mobile app. Is the example sentence function not available on the app?

It’s available! In order to grab the most recent sentence data, you would need to clear the local data on the app. Here’s a link to a guide:http://docs.skritter.com/article/13-local-data

I just deleted all local data, logged in again, and still don’t see the sentences.

Do you have the example sentence option enabled in your settings? http://docs.skritter.com/article/58-vocab-settings-chinese#sentences

(If not, you should enable the option, and then clear the local data again)

Yes, it enabled. It only shows some of the sentences. Most (nearly all) do not appear when with the word. Perhaps the issue is that I first must review the word and sentence on my computer before it will appear on the mobile app? Any ideas? Thanks.

If I recall correctly, it can take up to a couple days for vocab updates to propagate on the server. If they don’t show in the next day, (and after clearing the local data again) would you be able to post a few words that don’t have sentences showing up for them on the app (even though you added them on the web)?

It has already been several days and still no luck. I have attached a screen shot from my phone showing the word 突破 and it has no example sentence. I have also included a screenshot of the same word from my computer where you can see it does show my custom sample sentence. I cleared the local data right before taking this photo. thanks. 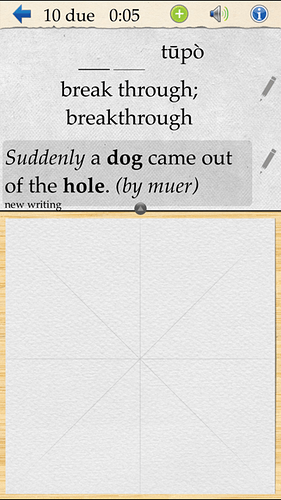 I do see sentences are showing on the web when testing with your account, however aren’t showing up on the app. We’re digging into this! It might be due to the DNS change (the legacy version switched from www.skritter.com to https://legacy.skritter.com, and so it might be pointing from an incorrect source). We’ll let you know as this unravels, thanks for the heads up.

Is this being looked into?

That was an odd one, but it should be working now! If you’re still not seeing them yet, I would give it another clearing of the local data.