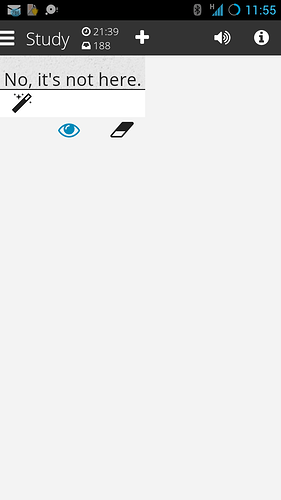 Might have to do something with the sentences on my custom list, maybe they’er broken or something. Nevertheless, Skritter shouldn’t hang up on this. It’s pretty unusable for me right now, can’t even ban the card to try if this helps.

I’d be glad if you could look into this.

Do you have zhuyin enabled?

Thanks for the information! I’m looking into the issue now and will let you know when I figure out what craziness is causing the prompt to break.

Great, thanks! Looking forward to a solution =)

The problem seems to be occurring because of spaces included between word groupings in your sentences. For example:

The recommended solution would be to remove the spaces from the sentences contained within your vocablists. The existing items that have already been adding are still going to cause problems though unless they are banned. Another more radical solution would be to fix the lists and the reset your account.

Thanks a lot for finding this out!

It seems working with sentences is quite buggy in general. I had a bit of a hard time getting Skritter to recognize these sentences in the first place and I think at least some spaces were added automatically. Are you working on this for the next version?

Also, is there any easy way to find and ban the offending sentences? I’d rather not reset my account.

Yes, you’re right. It does appear that Skritter allows for sentence adding and tries to add spaces as well. This is something I’ll have to address on Android at some point. Do you think you’ve added lots of sentences with spaces? The quickest way would probably be to navigate through all your lists with sentence spacing and ban the items. That way when it gets fixed you can unban them. I’ve added an extra week to your account for the troubles and downtime.

I’m gonna look into weeding out those sentences. Looking forward for the fix though ^^

…seems to have worked. Need to catch up on my reviews.