Skritter 2.0 for Android is showing me the same cards over and over again despite me marking them as “too easy”. I am unsure whether this also happens on the desktop or iOS version.

For example, Skritter will show me the exact same card as much as five times in ten minutes despite me marking the card as “too easy” each and every time.

Eventually this became so frustrating that I started capturing screenshots to document what is happening. I really like Skritter, but because this issue impedes my ability to study effectively, I’m thinking about cancelling my subscription and going back to Anki.

The scheduling information indicates that the rune was supposed to be shown 2 days later, but instead the card was shown 2-3 minutes later.

During this time my phone had a strong connection to my university’s WiFi. The connection was not lost at any point. 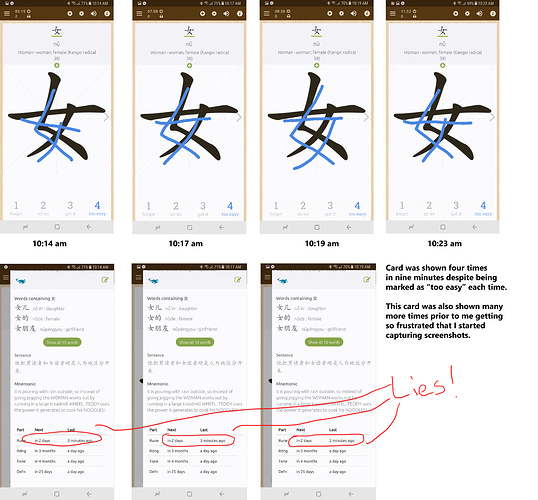 Example 2
Similar to the previous example.
[Image removed because new users are not permitted to post more than one image]

Example 3
Similar to the previous examples.
[Image removed because new users are not permitted to post more than one image]

Similar issues have been reported multiple times by other users
A similar issue was described 8 months ago in this post by user @hz. Here are a couple of excerpts:

The problem I’ve having now is that “got it” and “too easy” are both functionally useless. There is nothing I can do short of banning a word or character that will prevent it from popping up again and again in my queue. Worse, there’s no diversity in my studies: because of the frequent repetition, I’m only getting exposure to about 10 terms. Even if I skip through (and this is another problem, but I’ll post it in the Beta subforum later), marking at either 3 or 4, it just comes back.

To be clear, these aren’t all words that I’ve already gotten wrong today, or that I have a previous history of making mistakes with. A lot of these terms are new ones just being added to the queue. If I don’t mark them as “too easy” on their very first appearance, they’re on me like a social disease from that point after. And I’m noticing that a lot of ones that I DO mark as too easy from the get-go still show up again a few minutes later, especially after making a trip to the dashboard to get the counter to reset.

Another similar issue was described by user @kokaku

i tried using Too Easy on a word (hao3 because it appears in so many other words that I’m doing it all the time) and after that hao3 showed up even more (like every 10th item or so) - maybe something isn’t working quite right with marking a word Too Easy?

User @hz also commented on this post by @kokaku

You know I’ve been having massive repetition problems. Just out of curiosity, I checked a couple of terms that keep recurring today despite my having answered them correctly. One was 睡衣, which stats say will occur next in one month, last time an hour ago (I haven’t studied in about an hour). Did another one, tone review for 豐收. Next: in a year. Last: an hour ago (also marked correct at the time). I don’t know if there are differences between user accounts in how this scheduling is processed on the back end, but those are some pretty weird numbers. Why would I be asked to review for a second time today a term I just did correctly an hour ago that isn’t scheduled to appear for another year?

User @kokaku also reported this issue a second time, in a post titled "Caught in a learning loop"

I’m seeing the same couple dozen or so words over and over again, even though the timings say that I shouldn’t be seeing some them for days (ex: yi1/one keeps showing up even though I mark it too easy). Meanwhile, there’s plenty of words in my entire history that could be reviewed yet aren’t (right now, I’m in a review-heavy mode of going through Skritter Chinese 101 while adding in Radicals).

I feel like the algorithm needs to be a little smarter than it is. Some words seem to come up often and others hardly ever (and then when they do finally come up, I’ve forgotten it so I get it wrong so it enters heavy rotation). I’d rather a bit more evenness to the learning process.

I get exactly this problem (3.0.3, Japanese). It also happens with new cards - I’ve seen the same cards come up again and again marked as new.

after working with skritter for months now, i think that some of this is not a bad thing - the short repetitions may be part of the cycle of getting a character or word into memory - however, that does not explain the times listed with the word which are clearly not accurate - the way it seems to work is that a group of words is focused on and then once those are good another group and so on (which seems to sync with the cache refreshing moment when the circle spinner appears)

Hi there,
Same thing for me in Chinese. After a couple of weeks with ten new hanzi per days, the review becoming longer, the fact that saying that it is “too easy” not being taken into account is very frustrating. I will keep Skritter until I finish HSK 4 but will probably switch to Anki afterwards because of this issue, which is very a pity because I really like Skritter.

What would be really appreciable from Skritter team is to get a definitive clear description of their SRS system on this.

According to Jeremy’s post 6 days ago the default interval for “too easy” should be 4 weeks.
The scheduling algorithm is described here.

For me it’s the last 1 or 2 words before the round icon starts spinning and skritter fetches new words, that are ones that i recently just did. On the web client it’s easy to spot too because it says (x minutes ago - 0% due).

It would be great if we could hear from someone on the Skritter team about whether this scheduling behaviour is intentional or not.

After several months on the Beta, I went back to the old android app. I just don’t trust the algorithm anymore. I kept seeing mismatches between what is supposed to be scheduled and what is actually shown. It repeats characters for no reason prior to fetching things from the server. The counter never goes to zero, and if it eventually does, it immediately jumps back to 30 or 40 as soon as you exit the app.

With the legacy app, I keep getting the same few characters, sometimes seconds apart, until I learn them, and this is what I want.. With the beta, it would put in many other spurious characters between repetitions and it would take longer to learn.

I hope that the team will prioritize these issues.

Hi, also same issue on the count that jumps back as soon as you leave the app.
Skritter team, can you update the situation? This is the heart of your system.
R

Hey, good detective work, thanks for the detailed report. These bugs are tricky for us because while we do have lots of tests around the scheduler itself and are confident in its correctness, there are a lot of other moving pieces between that and the UI of a client app (of which we support 5 that all work a bit differently), plus every user’s account is different. Repetition should be a part of S R S, but I totally agree you’re seeing something like 女 way too often and that is unintended behavior. It’s not the best solution in every case, but bug or not if you’re seeing reviews you don’t want to see, don’t be afraid to ban it. Even when everything works correctly, as you learn thousands of items, reviews will grow and thus review times will grow on average unless you take out the words you really know.

But to reiterate, what you’re seeing is indeed a bug. My random guess is it’s a beta only thing, probably due to some bad caching or incorrect filtering for recent reviews.

There hasn’t been a mobile beta update for a while, and for good reason–we’re working on some major overhauls to improve three major areas: performance, scheduling, and offline mode. These are some of the most common areas users give feedback on, and rather than continue with smaller gradual improvements, we’re taking the time to noticeably improve the functionality in these areas by some making larger changes, but they take time. We want the new apps to be the best ones that you all undoubtedly prefer to use, and we know in some areas there’s still work to do. So we’re working on it!

This is also happening to me. I’m happy that a developer responded to the initial post, but my free trial is about to end in a few days, so I’m eager to know whether this might be fixed soon.

To me, this is the most important feature - accurate SRS. I don’t want to enter something in over and over despite me having learned it and marking it “Too Easy”.

I’ll keep an eye to see if this has been fixed, but I’m not subscribing until then. Other than that, it looks great! The writing feature is something I can’t find anywhere else, so I’m looking forward to Skritter becoming useable for me.

Ah, and btw, I have used this on both PC and Android on my tablet.

I’ve created an issue for this, but unfortunately with our release schedule, any fix for it won’t go live in the next few days. I don’t believe this is an issue on the current production non-beta Android app (please let me know if I’m wrong!).

Also, especially for brand new users with a small set of items that they’re studying from, the amount of possible things they’ll see in the first few days is pretty small. Skritter doesn’t stop you from studying like Anki or other SRS systems, though we’re trying to encourage smaller, more “reasonable” sessions over hour or longer marathons. So if you only have 10 items, something like 女 will keep coming up relatively often even if it’s really due 2 days in the future, just because there’s nothing else due sooner in your queue.

Don’t be afraid to add more items if you feel like you’re ready to move on. We cap our auto-adding system so that the system itself doesn’t overwhelm you, but if you’re studying a textbook you already know half of, moving at our default pace would be pretty annoying.

But in any event, I hope you’ll stick around and try us out again in the future!