As I am going through a list on the Chinese app, I am banning a few words as I am learning them. However, when I went to My Words and sorted on the banned words only, I only see a few of the banned words and one is a duplicate (appears twice).

However, if I go to the website and look, all the banned words appear.

Am I misunderstanding how to look at my banned words on the app? Or is this a bug? 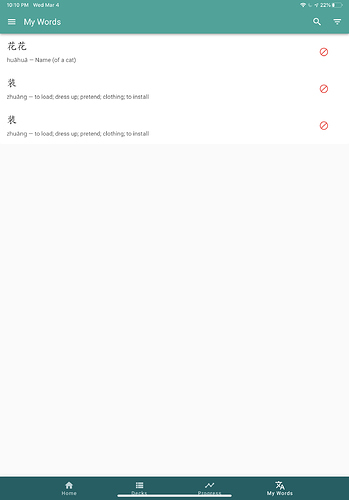 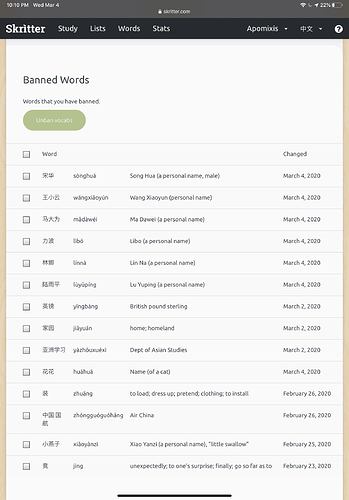 Would you be able to confirm if those 14 words were all banned in the app, or had you banned some of them using the web version?

Also, have you reset the data on the app recently? If so the banned words will show up in the app, but you would have to tap on the deck first from within the app to download all of the deck content.

Quick follow-up. We’re exploring ways of improving this. At the moment we’re trying to fetch things from the server more efficiently, and banned items are only getting fetched after decks are downloaded to device because you’re not studying those items in your queue. We have an issue open for it.

The banned items are all within decks I am actively learning from. These decks are in use currently in the latest production iOS app on iPad Pro 11”. I banned these items within the app over the past week or so, so they are newly banned.

Edit: I just banned some additional words and now the banned list appears to have refreshed. However there are still weird doubles of items as you can see in this picture 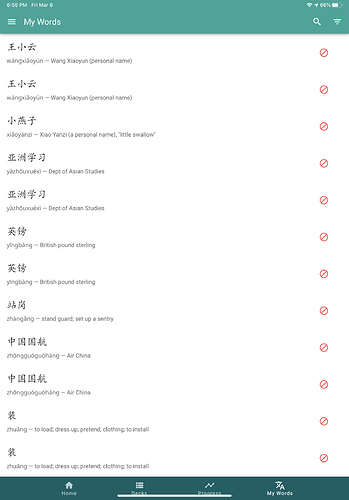 The doubles of items is very strange. I’m certainly not seeing this behavior on my banned words list. @josh we probably have to load up this account on device to see what the heck is going on!

Maybe it’s the way I’m banning them. Here’s what happens:

1). I start learning mode
2). A word comes up that I don’t want to learn. I hit the info button and mark it as banned.
3). However, learn mode does not leave that screen. So, at the bottom of the screen I say “mark as learned”
4). Then Skritter moves to the next item to learn

So, perhaps my banning an item in learn mode before I actually learned it is the problem that causes the duplicates?

Alternatively, sometimes I go into a list before I’ve started to learn it and mark several items as banned (just looking at the words in the list) before starting learn mode. Then, I start learning the list.

So, one of these two workflows must be responsible for the issue. The first seems the most suspect.

One thing I noticed is that all the double-banned words are written differently in traditional Chinese.

Whenever I search for such items, I often get two results: a “pure simplified” entry and a traditional-with-simplified entry.

My guess is that when you ban these words, the system is banning both. And then, since you’re studying simplified, the traditional-with-simplified result is rendered as simplified in your banned word list.

(站崗 is a curious exception; perhaps one banning mechanism bans only the word you are studying, and another bans all variants. Or that could be the connection with your pre-learn ban: you haven’t learned it yet so the system goes ahead and bans all variants.)

All good clues for figuring out the issue and patching it up. Thanks for the additional details!

Side note, banning an item when you’re in the learning mode should probably skip the item you’re on and move to the next item up for study. I’ll make sure I can reproduce the steps you’ve mentioned above and open an issue for it!

Next update should fix the issues you’ve reported. To see all banned words on your account you’ll have to grab a fresh copy of local data.

New behavior is that the initial download will fetch banned items globally along with the rest of the items that are active in the queue.

We’ve got a few things that are being tested at the moment, but we hope to have a beta update out early this week!