There’s one thing I think that this site absolutely needs to improve on, and it’s support for polyphones. I’m trying to learning certain definitions and pronunciations of certain characters, and everything gets lumped together. A lot of the time, the definition and pronunciation I want to learn are the second items in their respective lists, which basically makes focusing on those things incompatible with Skritter. Even on the tone tasks, if I don’t get confused by the multiple tones and write the tone correctly, if it is the second one in the listed pronunciations, the first pronunciation is still the one that plays!

This problem is actually kind of absurd in a lot of instances. Take the character 叉 for example. According to Skritter, it can be pronounced with all four tones (chā, chá, chǎ, chà), but only one definition is listed. If I look at Pleco, it lists the first tone as a noun meaning fork, and the third tone as a verb meaning to fork. The listing for the second tone is a dialectal variation, and there is no listing at all for the fourth tone. So if I were to simply add this character, not knowing anything beforehand, how am I possibly supposed to know that this character can be used in multiple parts of speech, and which pronunciation corresponds with which definition? 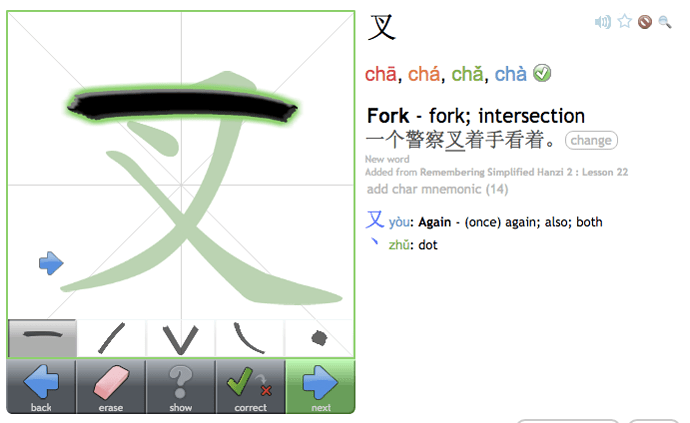 We know that this isn’t handled very well at the moment and we are working on a better way of doing it. However, I’d also like to point out that this character does not follow the standard we have in Skritter, so it’s usually bad. We currently use a system where each new pronunciation has a new definition on a new line, in the same order as the pronunciations are listed.

For instance, look at 长 which does follow the standard: 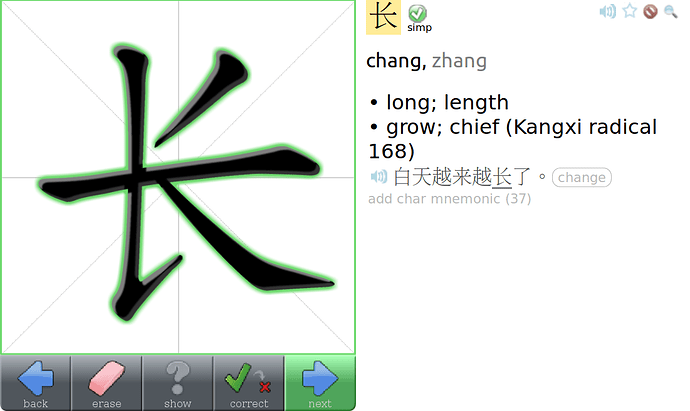 As you can see, the definitions appears on separate lines in the same order as the pronunciations.

I have updated 叉 so that it now follows the standard, but I removed the second tone pronunciation since that seems to be dialectal and not common enough to include. I can’t show a picture it takes some time for the change to take effect, but it’s already been fixed.