There seems to be a strong mismatch between my Total Word / Characters Learned Count on the Android App vs. the Web App.

Screenshots should explain the rest: 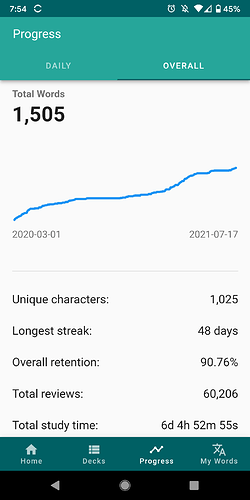 Why is there a difference here and which count is more accurate anyway?

In my case the difference between the old total and the new total is almost 200. My hunch is that the web page might remember words that I’ve deleted, but that’s just a guess.

I think the website includes banned items in the total, but the mobile app does not. I’ve banned a lot of unnecessary stuff I added years ago and the difference on my account is more than a thousand, which is roughly in line with what I would expect. In that case, the mobile app is more accurate!

which count is more accurate anyway?

Unlike previous versions where there was lots of guesswork and overlap between words and characters the app is adding them all together to give you a single total count.

We choose words because the same verbiage appears quite often in other applications we’ve looked at, and even HSK/TOCFL lists and textbooks generally clump things like phrases and characters into the typical 生词表.

If you add up characters and words on the website or previous clients the total numbers should be pretty close to what the mobile app displays. The discrepancy between the counts (if there is one) is because the new apps do not calculate the ongoing ebb-and-flow of trying to estimate what is actually “learned” at any given time on the Overall progress screen. It’s a costly server-call to do on the fly every time you load the screen, and it can be extremely demotivating to many early beginners to see negative values. It’s also a bit tricky to explain and we get way too many support emails about it.

So, if you’ve added something to your SRS queue it will increase the total word count by one the moment you review it for the first time, and we’ll continue to prioritize the things you’re struggling with the most by adjusting your due cards accordingly.

You can, however, expect some form of detailed weekly progress reports in the future as part of Skritter Premium that will provide those details and metrics, and even future study modes in the app that focus on leeches, things likely still in your short-term memory and all that fun stuff.

(Edited by Jake with all the juicy details)