I’m not sure what is happening but this is a new problem with the beta app, just last few days or so.

When I switch over to review the deck with all the new words I’ve just added, even if I have as many as over a hundred cards due in that deck, all I get for review is pinyin and definition cards.

I make a new section each day and add words each day to that section.

Today when I went to review the deck, out of over 100 words, only one was a writing card, and there were no tone cards. The writing card was for a word I added about a week ago.

This has been happening for several days now.

It’s not my settings - checked general settings and those for list. All parts being studied.

It doesn’t seem to be a problem with older decks, so far at least.

There’s a patch coming out that will fix this, although the writings and tones will need to “relearned” by going into the learn mode again for them. We’ll keep you updated!

Thanks. It happened again today, out of 30 cards, 29 pin yin and definition, only one tone, zero writing.

By the way, it only seems to be happening on the two lists I created in early June.

Apple just approved 3.4.4 and it is live in iOS App Store. As Jeremy mentioned, you’ll have to relearn the words in the app for the writing and tone cards to appear.

We’ll be working on a way to detect incomplete items (not all parts studied) so they can be quickly added, but we wanted to get this bug fix out ASAP

How do you “relearn”? Will it automatically allow me to learn them?

I’ve been using the beta 3.4.2, and never noticed a production 3.4.3 came out (bypassing beta program). I still don’t see a production (nor beta) 3.4.4 on the US App Store yet though. I’ve been adding and creating lists each few days. I’d hate to have to do lots of manipulation to fix an issue I didn’t realize was there.

How do you “relearn”? Will it automatically allow me to learn them?

The app won’t automatically mark items as unlearned at the moment. Learning mode logic checks for any part as being studied, which then gives you the circle of completion for the item.

This bug should be an edge case for most decks on Skritter. The issue appeared when we deployed a fix to honor the “Limit Sentence Parts” deck-level option. The app started ignoring writing and tone cards on all items, not just sentences. Gah!

Thanks. It happened again today, out of 30 cards, 29 pin yin and definition, only one tone, zero writing.

By the way, it only seems to be happening on the two lists I created in early June.

It looks like those decks have “Limit Sentence Parts” enabled, which is causing the issue at the moment.

There are a few options for getting missing cards into the queue on previously learned items. We’ll handle this better on the mobile client in the future, but it requires some extra logic checks and a new option, which we need to build.

First, you can go into a deck section and tap on any word and press the “Learn Now” button from the info screen. Any missing cards will get added to the review queue. The “Mark as Learned” button on the preview card will make this process quicker.

Second, you can use the website to add larger batches of items–recommend if you’ve been studying a lot of items from a deck with “Limit Sentence Parts” enabled. The legacy website is probably best suited for this task since you can clearly see studied parts and also study single sections directly.

I really wish TestFlight would send an alert when a production build is released. Unfortunately, TestFlight builds go into a review from Apple just like production builds, and the last two patches have had some bug fixes and improvements that pertained to Guest and trialing users specifically that we needed to get out the door fast. The production build should already be live for anyone searching Skritter in the store for the first time, but it can take a few hours for the update option to appear. I’d check back later today, and it should be available.

I’m going to be testing a few scenarios today to see what happens when we remove TestFlight builds before the 90-day expiration period. We probably need to be a bit more aggressive about this for all our sakes, but I’m hesitant to just remove a build that is actively on devices without doing a bit of testing first. For example, I have no idea what happens if I delete a build that is open and active on my device. I’m about to find out!

So, if I look at the “green squares” screen for my lists on the legacy site,
I should be able to spot potential problems.

Interestingly, I was going through my lists looking at the green boxes on the Skritter site. This list did NOT have sentence part limits checked, but still had no “definition“ test entry for these two characters. I went into the 3.4.4 app and relearned these, and then started to test and see the definition being the first item it asked for. So, something went wonky. 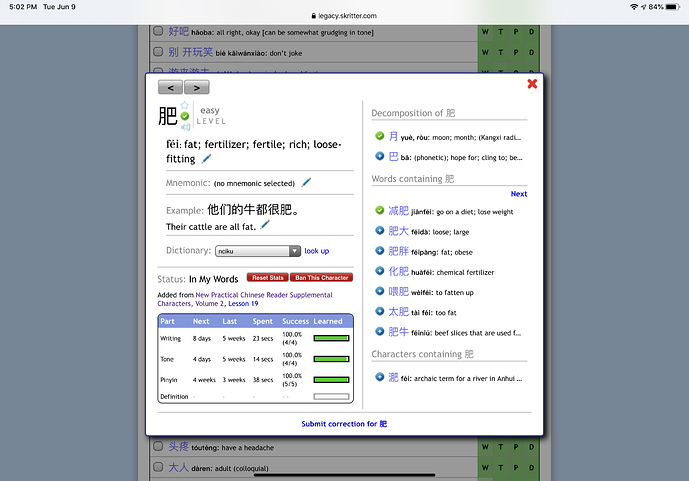 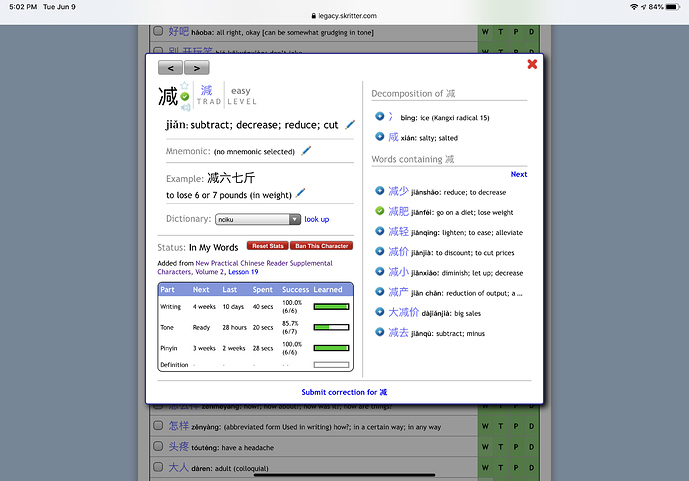 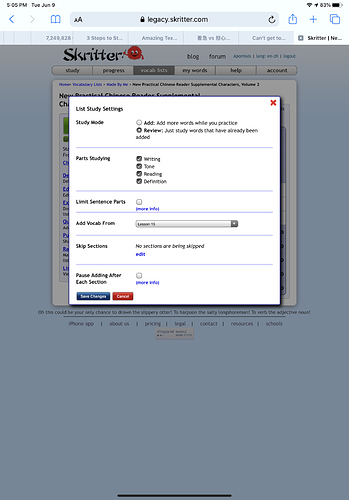 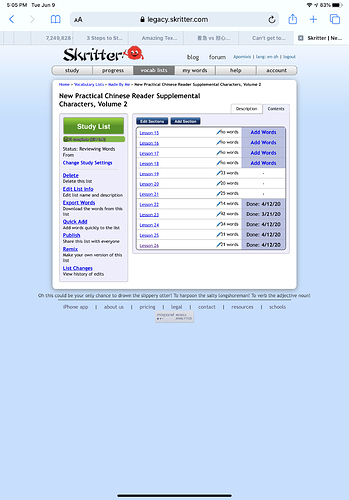 Here are some of samples from the Skritter provided list for New Practical Chinese Reader Vol 2 where several vocals didn’t add the Definition. I left them unchanged in my account so somebody could look into them on the backend if they wanted to. If nobody’s going to look into them let me know and then I will add them manually. 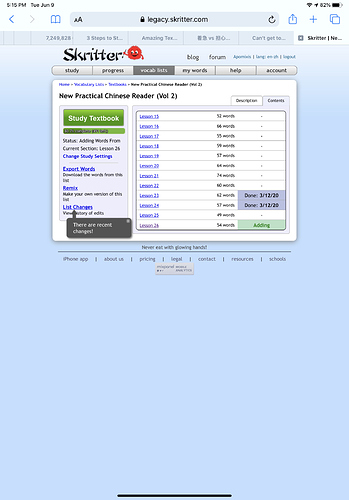 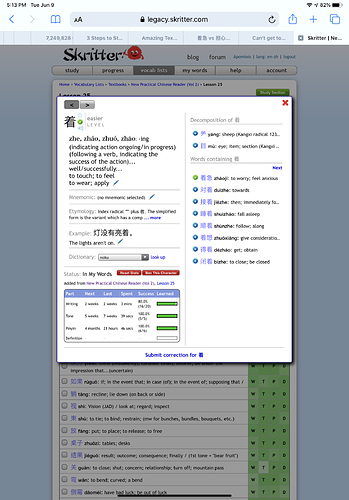 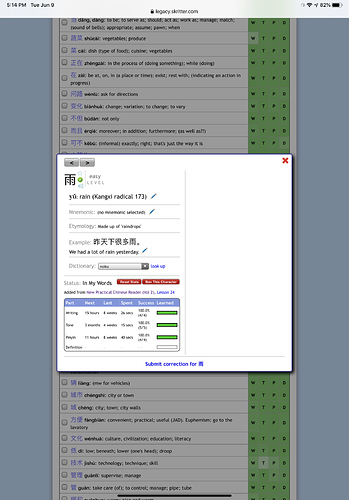 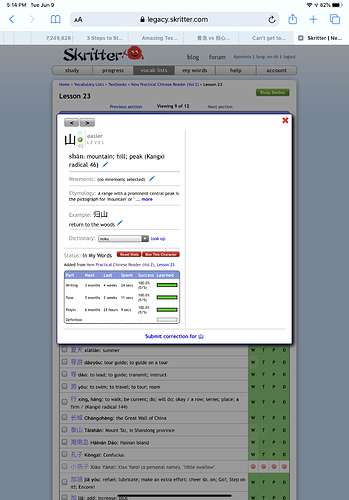 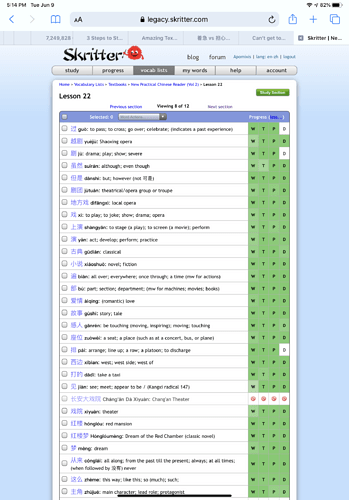 @Apomixis green light to add them manually. We’ve already got the improvement open, and what you’re seeing falls into the use case.

Wait - the latest beta is only 3.4.2 but the actual app is version 3.4.4, have I got that right? So what are we beta testers testing? We’d be better off using the App Store app for more improvements?

My opinion is that once an app goes from Beta to production, we aren’t beta-testing any more. However, it appears TestFlight (on iOS) doesn’t notify users when an app moves to production.

BUT, it would be nice to get some notification about a beta-series ending.

Edit: @SkritterJake. Can the beta have a different ID that allows both a beta and a production app to be simultaneously installed? Currently, they are single-instance.

There are a few options for getting missing cards into the queue on previously learned items. We’ll handle this better on the mobile client in the future, but it requires some extra logic checks and a new option, which we need to build.

@SkritterJake. Is there a timing for the feature to “fix” missing sentence parts? This summer? Or a nebulous “SOOOOOON”. 2025?

Sorry for being super vague. Ideally in one of the upcoming patch updates that we release before the end of summer!