For the last month I’ve been pretty much struggling to get my due items done daily. I spend like 40-60 minutes daily (split in 2-3 sessions) just to clear out the list, without getting to add any new word. I estimate my amount of daily due items is somewhere between 300-400. I thought this might have happened because I have a lot of vocabulary, but a friend who has just a few hundreds less (we’re talking of numbers below 1000 words) is getting just 40-60 due items per day.

I’ve became a “slave” of the due items and I wanted to get clear if this can be a bug or what. Because sincerely, I don’t think this is helping me progress on my Chinese. But the opposite, really making me consider if I should let Skritter go.

This is a screenshot of what Skritter 1.0 calculated yesterday that would be my due items for the next weeks and what it has calculated today: 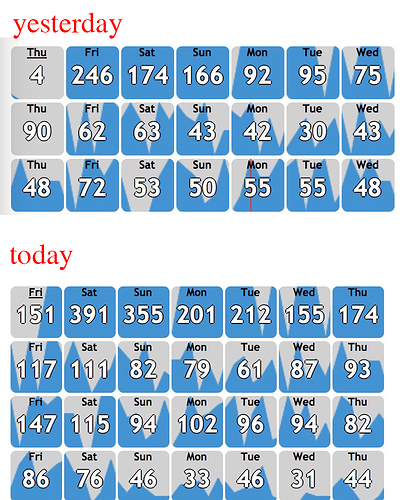 As you can see, the due items for the following days have increased considerably without adding new words.

I really don’t know what to do, the situation is unbearable. I can’t believe this is normal as I might have to spend more than 2 hours daily if I want to make any progress.

Anyone can help me? Thanks!

You could try lowering your retention rate a bit which will generate less reviews, that might be a good idea if you’re finding that you are remembering them well at the default retention rate. Do you recall if the number of reviews marked as incorrect yesterday would line up with the number of new reviews calculated today?

Not sure how can I check that?

I’ve made a new screenshot to the due items planned and it’s increased again. 444 for today. I don’t feel this is normal :S

How can the reviews planned for the same day (Saturday) increase in three days from 174 to 391 and then to 444? 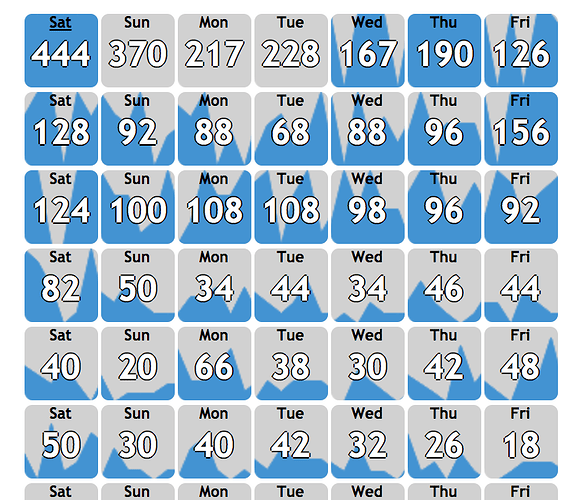 @Jeremy of course hit on the important point and what you can do about the size of your queue, but perhaps I can elaborate on what’s going on and how you can think about your queue’s behavior.

When you study an item, no matter what grade you give it, it needs to become due on some day in the future. Sooner if you forgot it, and later if you remembered it. That item is then added to the set of items that were already scheduled to be due on that future day (if within the next eight weeks, it will be included in that graphic you’re referencing). When you’re learning new words, it’s reasonable you will get a lot of items added to the planned reviews for the next few days. The retention rate @Jeremy mentioned determines how far in the future the items will become due again; a lower retention rate pushes reviews further into the future.

An important question is: when you’re studying and your number of items due is above zero, are all the items actually due? And is it reasonable they are due (that is, you recently forgot them or you got it right and it’s been a good amount of time since you last saw it)? If those aren’t true, then there could be something fishy going on.

Two more points I’ve picked up over the years of using Skritter that I think could seem to inflate your number of items due and reviews planned for a day.

Similar items are rescheduled and pushed back “a little bit”, it may be later that day or it could be the next day.

For some specifics on grading/scheduling:

A grade of 1 (“don’t know”) gives you a next review interval about 25% as long as the one that was scheduled for this review, with a minimum of thirty seconds and a maximum of one week. If it’s the first time you’ve seen an item, the default interval is ten minutes.

A grade of 2 (“so-so”) gives you a next review interval about 90% as long as the one that was scheduled for this review. If you mark something so-so on the first time you see it, the default interval is 1.4 days.

A grade of 4 (“too easy”) is like a 3, but with a factor of 3.5 instead of 2.2. The default initial interval is four weeks. You only need to press 4 three times in the first three years for an item, so it’s a very quick way to get easy stuff out of the way.

In addition to the above, each interval is randomized by up to +/- 7.5%. Items you get wrong a lot will start to grow even more slowly. Items which you always get right will grow even more quickly. And, most importantly, for each type of prompt (writing, reading, definition, tone), for each general interval range (first time, under twenty minutes, under five hours, under eight days, over eight days), Skritter will adjust these factors based on your past performance in order to target your desired retention rate. So if you often forget tones which have intervals scheduled between five hours and eight days, then Skritter will gradually reduce those intervals. If you don’t ever forget how to write things that you knew the first time you saw them, then those initial intervals will get longer and longer.

Each item’s scheduling can be affected when you review other parts for its word. If you study the writing for 先生, then if the reading and definition are also due, they will be pushed back into the future somewhat, so that the reviews don’t interfere with each other. After all, if you just saw the details for 先生 two minutes ago, it would be too easy to remember them if you got its definition prompt now. So you might see the definition prompt a little later, or the next day, depending on how the length of the current interval.

r. After all, if you just saw the details for 先生 two minutes ago, it would be too easy to remember them if you got its definition prompt now. So you might see the definition prompt a little later, or the next day, depending on how the length of the current interval.

I’ve stopped adding new words for a week to try and see if at some point I stop having those 300-400 words daily.

I’ve first activated vacation mode to try and reduce a 1000 due list I currently have. But I’ve noticed something I’m not sure if it’s normal or not: I did 100 exercises this morning and when I checked my due list again this evening the due task list had increased by 45. Is that a normal thing?

This could be normal, especially if you had marked many items as incorrect which would cause them to quickly resurface. Have you noticed the daily words amount is starting to decrease over the course of the week?