I started listing all the example sentences where some bugs occur. I maily focus on bugs here, not so much on chinese grammar issues. I am observing the example sentences shown on the right of the website in Firefox, Windows 10, Surface Book since they are always displayed without opening a popup like in the app. I have to click on the chinese sentence to reveal the pinyin and translation.

And then there are some sentences where the translation is obviously wrong or the pinyin has some very strange word grouping:

Big issues with the translation:
客廳 Downstairs is the living room, dining room, kitchen and bathroom< br\ >
指定 ｐｒｅｄｅｔｅｒｍｉｎｅｄ ｌｏｃａｔｉｏｎ (strange font or characters being used)
糖 Can (you) give me some sugar?

陳 Nguyen '15
I have no idea what that term is about, it is definitely no help at all and does also not contain the character. Since it’s a character mainly used for a name you might want to delete this example sentence.

I have never tried changing the example sentence in the info window, does this change it for all users or just for me? I tried to list words that are not just a matter of taste but defnintely wrong. Please let me know if I should continue listing sentences here.

Changing the example sentence will only change it for you. We’re planning to revamp the sentence system which should take care of the quirks and issues.

I’m not sure what’s going on with the words you’ve listed that have the definition as “_undefined” or the ones that don’t seem to have pinyin or a definition. I’ve double checked to make sure they’re set up correctly, and they look to be. Would you be able to post some screenshots of this the next time it happens?

Any sentences that are bad can be disabled, and we could change the pinyin grouping for those that are incorrectly set up. Would you be able to post those to be checked over, (in hanzi)?

About the sentences without pinyin and without translation: This is server-side, the content doesn’t get loaded: 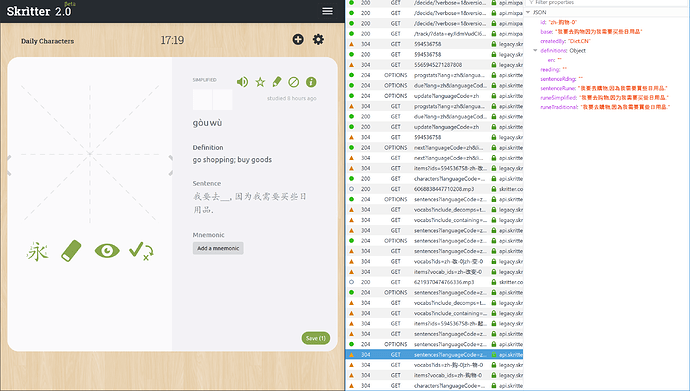 Items not having an example sentence return an empty JSON response. It’s a bit harder to track down the “_undefined” items, since I have to wait for them to show up again. How should I list items for you to be most helpful to debug? Will characters (活動) be enough to identify an item or do you need the internal id (594536758-zh-活动-1-rune)?

Why do you need the hanzi of the example sentence? I thought you should be able to find my listed items easily in the database. I can do it of course, I just thought it’s not necessary.

You’re right, sorry to almost make you jump through extra hoops needlessly! Tone marks would throw off the search, but it looks like that’s no longer an issue.

I’m going through the entries you’ve listed as incorrect or bad and will correct/remove them.

Just the characters are enough, (or the pinyin apparently if it’s a unique entry)![quote=“R4T10, post:4, topic:1881”]
This is server-side, the content doesn’t get loaded:
[/quote]

The dev team is looking into it, thanks for your update! Hopefully this can be resolved soon.

Today I found another word with the “_undefined” translation. It is again coming from the server. 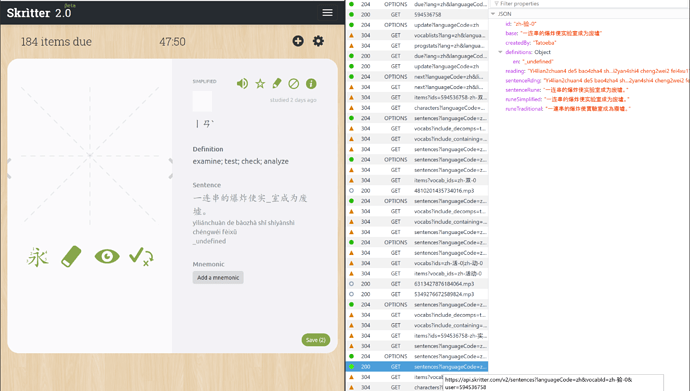 I can also see that capitalization for the pinyin seems to be present even in the example sentences but it is not shown in the final output.

Just letting you know we’re still looking into this, thanks for your report!

@R4T10 I’ve looked into the issue a bit further and it appears that the data you’re seeing is “technically” correct according to the server. It appears that we have two versions of the sentence for 购物 and the one without the definition has more user votes by a margin of 21 to 3. In the second case of the sentence for 验 it’s a user created sentence that we only have a French definition. I’ve made a note about both of these too see if there is some backend logic that can be applied to present things in a more friendly way.