Force alternate version of character (I want 倖存, not 幸存)?

Hello, I’m trying to add a word to a custom list. It’s from a comic book I’m reading (Attack on Titan - 進擊的巨人). In the book, it’s printed as 倖存, meaning to survive a disaster. When I look it up in Pleco there is an entry for it. But when I try to add it to my Skritter list, it changes it to 幸存 (taking the 人 off the side of the first character).

From what I can gather from dictionaries, both versions are acceptable but I want to know how I can force the one that I want and not have Skritter make the decision for me. Is this possible?

Edit: I’ve even tried using classic Skritter and manually editing the entry, changing 幸 to 倖, but as soon as I hit enter, it changes it back.

倖存 is the traditional form of this word. Since the character 倖 is not within the scope of the 8300 general standard Chinese characters defined in mainland China, there, it is written as 幸存 instead. So, Skritter should give you 倖存 if you are learning traditional characters and 幸存 for simplified characters.

I do have my account settings set to traditional characters (Study Settings -> Character Styles -> only Traditional is checked).

As far as I can tell, both 倖 and 幸 exist in traditional Chinese, with somewhat different meanings or connotations. However, Skritter will not accept 倖 even if I input it by itself - it changes it to 幸 every time.

Skritter will not accept 倖 even if I input it by itself - it changes it to 幸 every time.

Hmm, would you be able to test this on the legacy site (https://legacy.skritter.com) and let us know if you’re running into the same issue when trying to add 倖 ?

Edit: I’ve even tried using classic Skritter and manually editing the entry, changing 幸 to 倖, but as soon as I hit enter, it changes it back.

Hi Jeremy. Yes, by “classic Skritter” here I was referring to the legacy site.

I’m having the same problem trying to input 盡快 and having Skritter change it to 儘快 (adding the 人字旁). According to Pleco, these are alternate forms and should both be acceptable.

Using the legacy site, when I go into my vocabulary list and click “edit” for the 儘快 entry, the text that’s in the dialog box is the 盡快 that I actually input. But when I press enter it gets saved as 儘快.

This is the exact same behaviour with 倖存 getting changed to 幸存. It’s just kind of funny that in one case, it is forcibly removing the 人字旁, and in the other, is forcefully adding it.

Is there no way for me to manually create my own entry using the characters I want without Skritter changing things on me?

are those entries correct? It looks like it was a variant issue, however if this still isn’t correct please let me know!

Actually, there are some differences in the connotation between 盡 and 儘. The following page (in Chinese) http://www.chinsoc.hkusu.hku.hk/usefulmaterial/0001/01.htm explains the differences between them.

I wonder if it’s a Taiwanese thing? It’s from a comic I’m reading, which has been translated from Japanese specifically for theTaiwanese market. 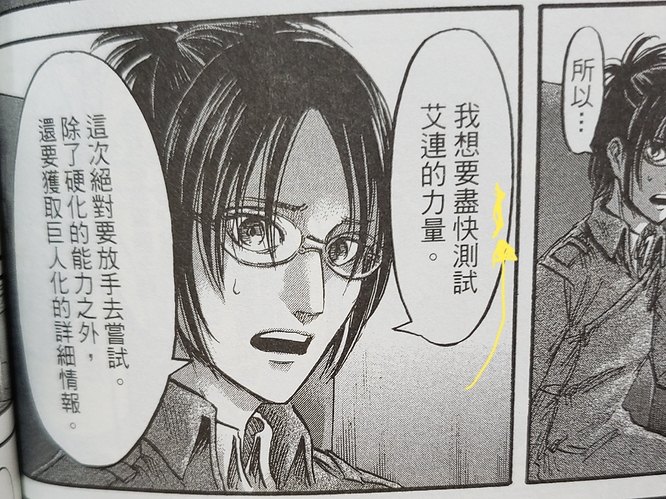 are those entries correct? It looks like it was a variant issue, however if this still isn’t correct please let me know!

Thanks Jeremy - yes those are correct**. My entries seem to have updated themselves in my vocab lists on both the legacy and new skritter.

However, in the Android Skritter app (which is what I use exclusively at this point) I’m still stuck with the “wrong” alternate form and i can’t seem to do anything about it. Creating a new entry still has the same problem.

** edit: actually as helpfully pointed out by pts, the pronunciation of 盡快 should be jin4 kuai4, not jin3 kuai4

Here is the Pleco entry: 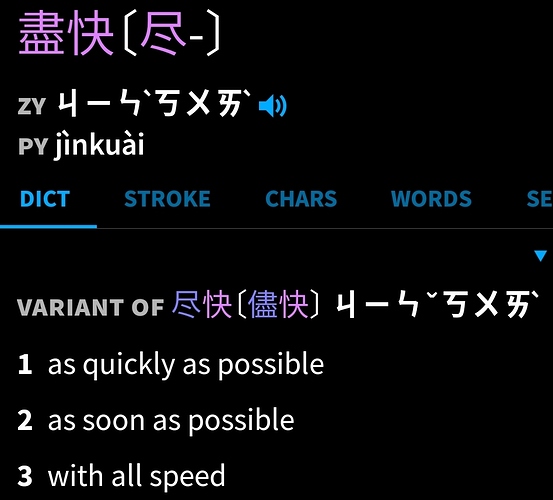 Yes, both 盡快 and 儘快 exist. But their readings and meanings are not the same. Reading 盡快 as jǐnkuài is definitely a problem.