This month’s challenge on Hacking Chinese is focused on vocabulary, so Chinese characters, words and expressions. Since this is closely related to Skritter, the challenge is sponsored by Skritter, which includes a special offer for new students and prizes to win for all.

You can learn more about the challenge by

Jake and I will both join the challenge and we look forward to some friendly competition! 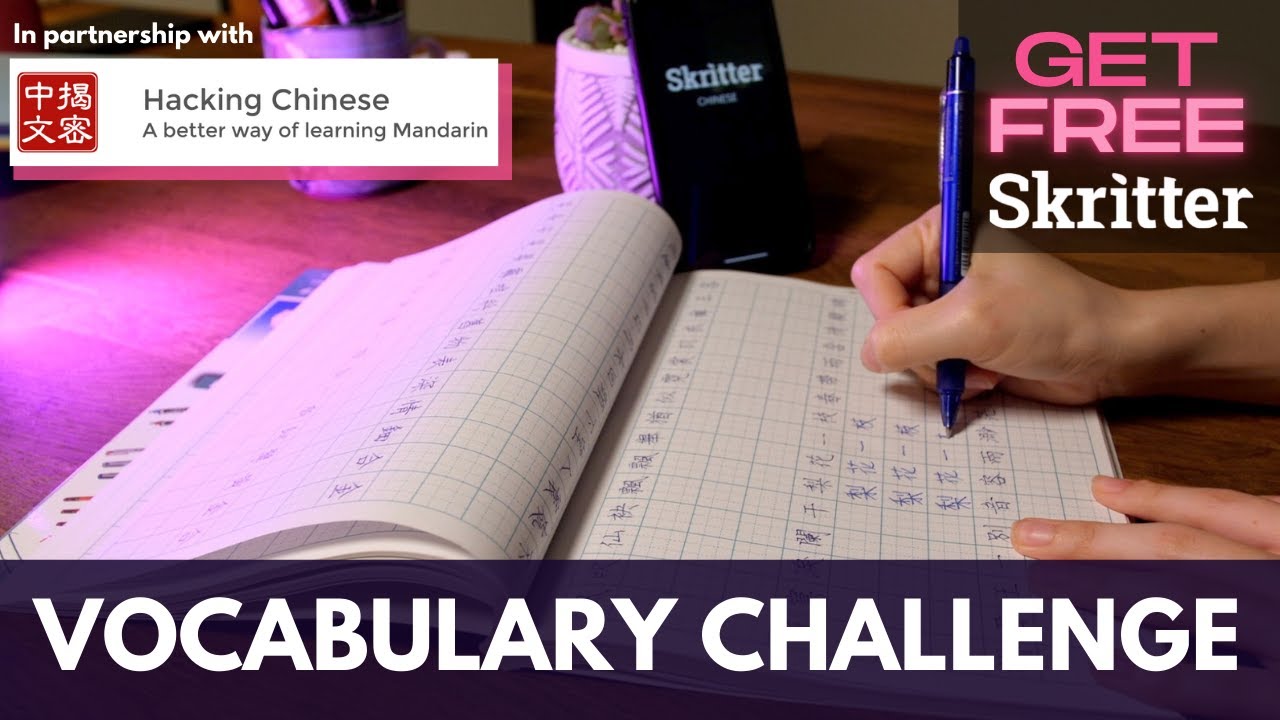 Excited to hop in on the challenge. I have about a 9k backlog that I have been trying to work down(it was 11k a month or two ago) so I am excited to really put the pedal to the medal and make some progress.
I am hoping to get 12 hours.

What I’m studying
I’m aiming for 15-hours of study over the 22 days. I figure about 15 minutes/day will be spent clearing my due cards. The rest of the time will be spent studying 5-10 individual characters that I’m adding from the 台灣通用字彙 study decks @SkritterOlle made back in 2012. Target of around 5-minutes of active studying per new character depending on how familiar I’m am with it to customize definitions, study components, etc..

Other vocabularies will be coming from poems, songs, and articles I’m working on in conjunction with my 1-on-1 classes I take every week on italki. These words don’t get added daily since my usual flow for them is

How I’m sharing progress publicly
I’ve got a personal studygram account over on Instagram just for Chinese stuff. I’ll be using the hashtags #skritterstudygram and #hcvocabchallenge on all the related posts. If anyone is interested in doing the same, consider following me and using the hashtags so we can be study buddies!

Apart from that, I’ll naturally be posting updates on the actual Hacking Chinese challenge progress page. Gotta try and get that free Skritter!!! 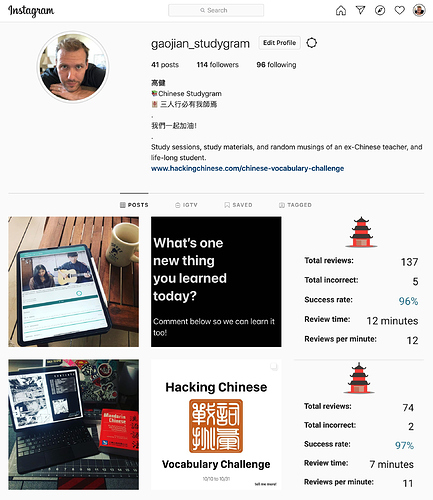 Here are the decks that Olle and I reference in the video chat for anyone interested.

Via Olle on YouTube. A word of warning, though: The last level is a beast in terms of content. It has roughly 2,000 characters in it and the last half contains many characters that educated native speakers recognize, but don’t use much or are very specific in how they are used. It can, of course, be debated how many characters one actually needs to learn and maintain, but for me personally, the limit seems to be around 5,000.

I’m happy to see we’re not the only ones to be excited about this! At the moment of writing, we have 53 people signed up. I stated my goal for the challenge in the video, but I will do so here as well. I will:

Whichever comes first. The real goal is to bring the due count down to zero, of course, and I think 21 hours will be more than enough to do so, but should that turn out not to be the case, I’ll cap the effort at an hour a day and be happy with that, too.

As a starting point, here’s my due count right now:

I’ll update my progress daily on Twitter: @HackingChinese. Feel free to ping me there with your progress updates! 一起加油！

I’m also really excited about this challenge! I thought I might share my goals for this challenge in this post. First the quantifiable ones (easy to verify using Skritter):

Now, as a non-quantifiable goal I’d like to focus more on the character components and their meaning when learning new characters, since I have not been doing this from the beginning.

Finally, I will be reporting my progress on the HC official page for the challenge and also via Twitter (@SoyJuanDiego15).

PS. I also created a list in my to-do list app with these goals to have them easily accessible 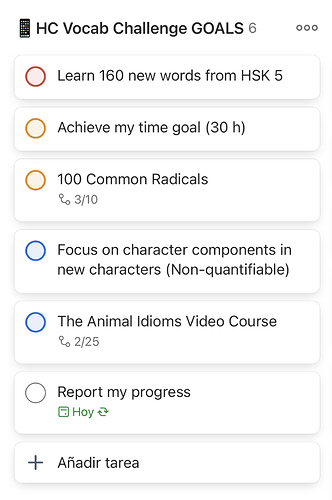 That looks very nice! We do have plans for goals inside the app, but it’s some way off still. Good luck with the challenge!

So… we’re on day 6/7 depending on your timezone. How’s it going, everyone?

I’ll likely hit 4.5 hours later this evening, but most of that time was front-loaded over the weekend when I blocked out a solid couple of hours for studying.

Reviews are humming along, and I might actually hit a proper 31-day streak this month (one day off way too many months in a row now), but I’m going to have to pick up the pace a little bit if I’m going to hit my 15-hour goal.

Loving all the progress updates on the HC Activity Feed, Twitter, and Instagram. Keep it up, everybody!

It’s going well for me so far, everything has been a breeze until yesterday, which felt really bad for some reason. There was a slight bump in the number of reviews extra (174 or something) and I forgot/mixed up a bunch of similar characters in a row. I was also tired, which made it worse. I’m on course to clearing the queue, but I’m spending more time than I thought, and might have to spend more if I keep adding words!

Just posting to say that I reached my goal! My time estimate was almost exactly correct, but I did spend the time in fewer days than I thought I would. So, I cleared my queue of 1,000 cards (all writing) in about 20 hours, where roughly half was spent in-app and the other app researching characters and looking things up. I expect the daily review count to be high for some time yet, but the bulk of the work has definitely been done. How’s it going for the rest of you?