How do you Chengyu?

How do you approach learning Chinese chengyu?

Do you learn each of the (typically) 4 characters and memorize them more like a sentence?

I have recently tried looking at them as just four syllables that mean one idea.

I know I’m splitting hairs here and for me it’s too early to say if I will remember them better one way than the other, but it just got me wondering what other mandarin learners do.

I would say something in between what you are describing - you should be memorizing it as a whole phrase. But the characters are obviously not random and shouldn’t be considered just something like four syllables strung together though. Many chengyu, proverbs, etc. have background context like a literary/historical reference or story behind them (think like the phrase “sour grapes” from Aesop’s fables - you can directly memorize what it means, but if you knew the story it’s much easier to remember it), so I think it might help you with memorization if you look it up and really understand the phrase.

I actually haven’t found any consistently great English sites for that purpose, but if you Google whatever it is + “meaning”, you will almost always find a Baidu link at the top of your results. (Or you can use Baidu search directly yourself but I’ve found that Google works pretty well 9 times out of 10.) Sometimes it’s a pretty long Wikipedia style article, and sometimes it’s more of a Yahoo questions page with native speakers asking what a particular expression or phrase means, and several people answering it with explanations. You might need to use Google translate to understand it.

Like for example, something like the proverb 兔子不吃窩邊草 (a rabbit doesn’t eat the grass beside its burrow, i.e. be good to your neighbors/coworkers/whoever going to be your people, can even be used in a situation like telling someone not to date a coworker)

I don’t know how accurate these Baidu pages are necessarily, but I find it’s a lot easier to remember the phrase because of these background stories like this:

There is a ravine deep in the silent mountain. In the ravine lives a brood of rabbits-mother rabbits, little gray rabbits, and little black rabbits. Mother Gray Rabbit taught her two children from an early age: “Rabbits don’t eat grass near their nest, otherwise hunters will come to the door.” So they don’t eat grass near their nest. Later, when the two rabbits grew up, the gray rabbit and the black rabbit left their mothers and lived separately. The gray rabbit lives on the east side of the ravine, and the black rabbit lives on the west side.

Although the rabbit is a typical herbivore, it does not eat the nest grass. The grass on the edge of the nest is used to hide, and if you eat it, don’t you expose yourself to the enemy’s eyes and kill yourself? It can be seen that to protect the living environment is to protect yourself.

Or let’s say a chengyu like 狼心狗肺 (wolf heart, dog lungs, meaning someone who is cruel and unscrupulous or has no morals)

You can get the background context story here in English: What Does Chinese Idiom “狼心狗肺” Mean and How to Use it

The answer to this question depends on many factors, including your current level of Chinese and the purpose of specifically studying chenygu. In general, I think chengyu can be treated as other phrases, meaning that it of course helps immensely to understand the component characters and how they fit together to form the meaning of the whole expression. Sometimes, you do need the story behind the idiom, sometimes this is not really necessary.

I think it’s important to consider the role of chengyu in your overall learning, though. In general, people overestimate the usefulness of chengyu, especially in speaking and writing. The truth is that using chengyu accurately is much, much harder than students tend to think. I encountered this many times myself when I started learning Chinese: you learn a chengyu, think you kind of know what it means, try to use it a dozen times and all of them are actually wrong. Sometimes people won’t tell you that you’re wrong, but many chengyu have a very specific meaning and usage and you can not rely on English translations at all! The only way to get around this is to learn chengyu along with a sentence that shows how it’s typically used.

A good example of this is the chengyu 十全十美, which appeared in the first textbook I ever studied, with the translation “perfect”. If you take a corpus of English texts and translate them to Chinese, and use 十全十美 every time it says “perfect” in English, you’ll be wrong in almost every single case (hard to estimate a percentage, but likely much more than 90 %).

So, I think focusing too much on chengyu is a mistake in most cases. However, as your Chinese becomes more advanced, it becomes increasingly important to understand chengyu and be able to make sense of them in context. This, however, is a different task from learning how to use them yourself. Here, it’s often enough to study the individual characters, how they relate to each other, and like I said, sometimes a story if it seems to make no sense at all (自相矛盾 really doesn’t make sense if you don’t know the story, for example). Flashcards work quite well for this, but so does increasing the amount of Chinese you read.

As usual, I’ve written about this exact problem elsewhere, so you can read more here if you want: 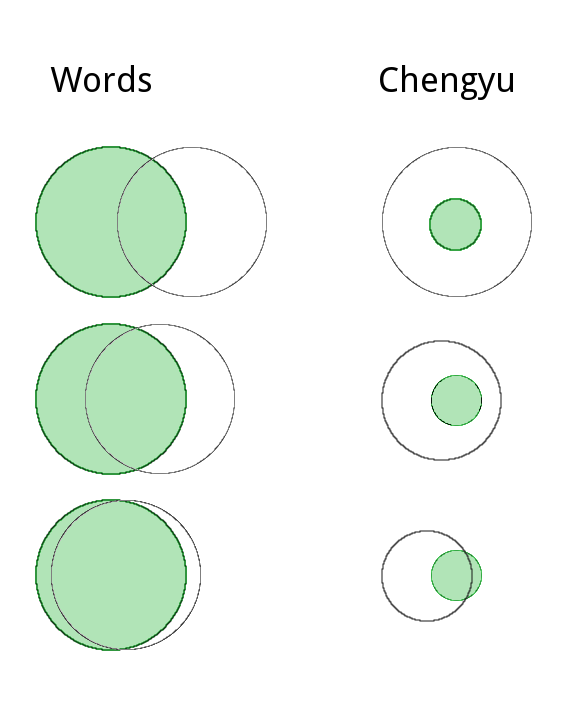 Many people regard chengyu as the golden key to the Chinese language and believe that learning chengyu will impress native speakers and take their Chinese to the next level. However, learning chengyu in the wrong way is likely to have the opposite...

Wow…thank you both for your thoughtful and detailed answer. I really appreciate it and I will check out the links you shared. A lot to consider!

Note also that many 成語 / 成语 (idioms) have their origins in 文言 (Classical Chinese), especially if they are four-character phrases.

I have observed that people who have studied Classical Chinese have a much easier time understanding and recalling these four-character idioms because they understand the very different grammatical rules involved in 文言 that makes for such efficient phrasing.

I agree, idioms can be fun and interesting, and while it helps to recognise when you hear and read them, it is not the best use of your time at initial and even middle stages of learning to devote much effort to them. At least not if your aim is to function in the language as quickly as possible. You will rarely have a chance to use them, and certainly struggle to do so correctly.

Read (about) them for fun, and perhaps leave serious idiom study for a more advanced stage, would be my advice.