How to import skritter lists to Anki?

There are some functions that Skritter still is missing (like being able to study every single word in one single list at one time), but I hear that it will come soon to android. While im waiting for this, im going to use Anki instead.

I noticed that there is an “export” feature in skritter and you chose between " Delimiter" tabs or commas. Anywho, I wonder which one I should use for Anki? I tried with tabs but it did not work. It looks like this in the list exported from skritter
“杠 槓 gang4 thick pole; rod; cross out; delete”
“抽样 抽樣 chou1yang4 sample (statistics); sampling; specimen”
etc.
Anki does not seem to understand whats what and when I try to import from this list, nothing gets added. Can someone please help me shine some light on this?
Thanks!

edit Actually, its seems like using “tab” or “coma” as delimeter makes no difference, the file looks exactly the same. Is this function bugged? There are no comas “,” in the “using coma as delimeter” txt file.

being able to study every single word in one single list at one time), but I hear that it will come soon to android

You can do this! You can update to the beta version by going to the Play Store page from your Android device, and then by scrolling down until you see a green button that lets you opt in to the beta version. Once it’s installed, you can tap on a deck’s name, and then use the Test mode to test on all of the words in the deck (even if they aren’t due for review).

If you still want to import lists into Anki, does it seem to work any better if you use the legacy website’s export feature for a list? (https://legacy.skritter.com)

Thanks! The thing is every time I have installed the beta version there has been something not working and it drives me crazy (and I know thats normal since its a beta version). Id rather wait for the real release instead. I will try to export list using the legacy site.

its been very stable recently.

Hey @DaXia, I personally prefer tabs for my Skritter imports as the file is cleaner. Definitions can sometimes have commas, so the file gets messy if you want to use commas to separate. But it should be possible to use either one. Here’s what my export looks like (both legacy and the normal website produce the same output and use the same underlying code, though the exported file will be named slightly differently): 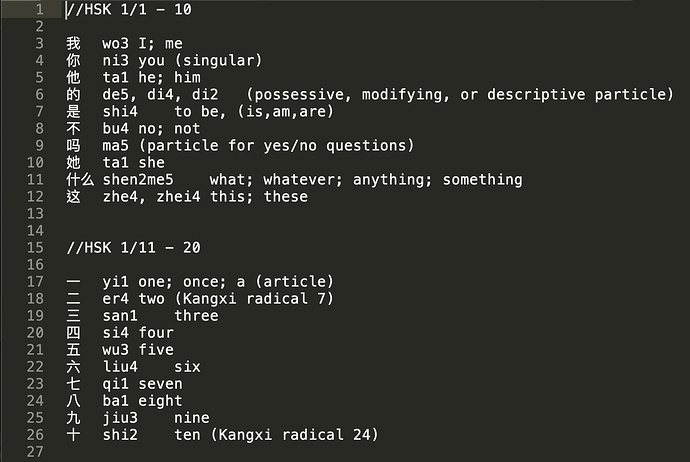 anki-import-1.jpg1542×1034 149 KB
Before import, I remove all the spaces and blank lines (e.g. //HSK 1/1 - 10)
I usually divide the list up into smaller individual files for each section, edit definitions, etc. to suit my needs too, but you can also choose to import the whole list in one go.

A lot also depends on the cards you have. I have a card set up so that the field order matches Skritter’s export. Otherwise, you’ll have to map that field 1 is the hanzi/kanji, field 2 is the pronunciation, etc. which can be an annoying problem that results in mis-formatted cards, especially if you add lots of stuff over time (I used to do chapter by chapter as I was going through class). Here’s my card/import setup: 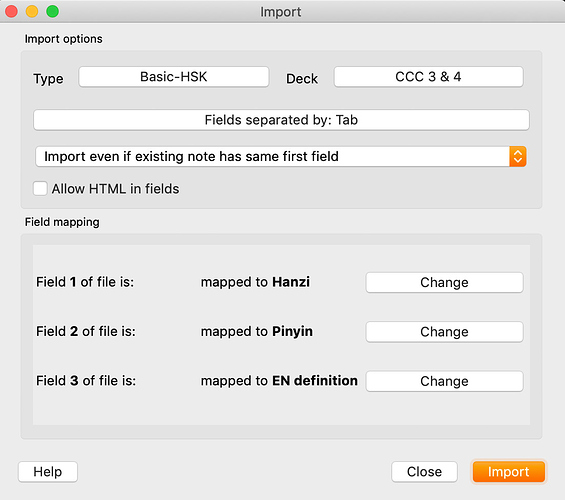