I almost never get prompted for definitions

I almost never get prompted for definitions although I have it turned on both in my account and in my study options, its almost only writing. Is there any way to fix this?

Possible, albeit remote possibility: There was a bug, that still sometimes manifests, where adding new vocabulary cards doesn’t include the definitions…the other 3 prompts get added, but not the definitions. If you go to the Legacy site, you can check your list sections and verify that the D entry isn’t white for each word (a white “D” square means the entry is not added).

By clicking on each word in this view, you can see the stats for reviews of each word too, such as when it’s anticipated for next review.

If you have a higher success rate with definitions versus writing for instance, that would explain why you see more writing prompts and less definition prompts. Also if you had the option disabled previously and then re-enabled it, you would want to set your list(s) to add back from the beginning for any skipped definition prompts to be added again, otherwise it would only start adding new definition cards moving forward from the adding position of the list. If using the mobile app, you could trigger the learn mode for a word to add the definition prompt (as long as the option is enabled).

I use legacy daily to add words to lists on mobile, before switching to the new app for review.

I have noticed lately that about every second or third word, from new words I’ve added (not the entire list), one of the forms (I learn both simplified and traditional) is marked all green (well-studied) and one is marked all white (not studied or gotten right.)

What’s weird about this is that it appears to be highly random, both in that it is only happening to some words, and in that sometimes it is the simplified version that has not been reviewed, and sometimes the traditional.

I can’t tell yet if in fact I am not getting one or the other version in my reviews, or if this is a syncing glitch. I suspect I am actually not receiving some simplified, and some traditional reviews, but when you review so much vocab a day, it’s hard to keep track. (If was all simplified that are missing, or all traditional, I’d certainly notice.)

I will try to post a pic so you can see what I mean.

Could someone on the Skritter team look into this on my account? Thanks.

Pictures below: you can see it is sometimes the simplified version, sometimes the traditional. It does not make sense that I would learn the tone, definition and reading of a word in simplified, and not also learn those same categories in traditional. 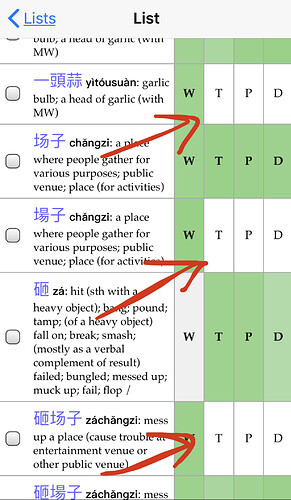 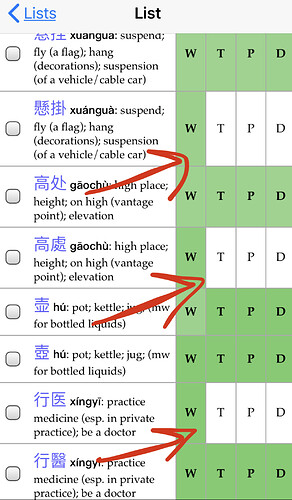 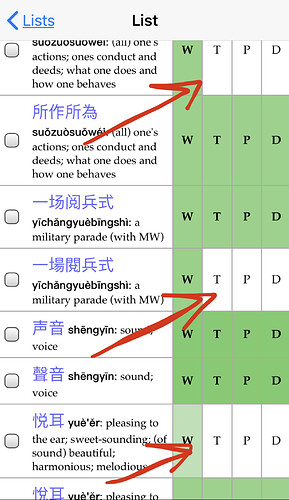 @Therebackagain this is expected behavior when you’re learning both character sets. Basically all versions of Skritter have always saved all reviews for reading/definition/tone prompts on the simplified version of the data. The character set is just swapped out back and forth at review time.

I’ll be the first to admit it’s a bit hack-y and isn’t exactly intuitive or expected behavior from a user standpoint, but it is the behavior we’re stuck with for now. I’m not sure of the original reasoning behind this decision, my guess is it was a data optimization.

However, there are a lot of unknowns in swapping the behavior/generating data to do something more predictable, especially for historical users that have been opted into the setting for a while. And until we’re able to completely deprecate all the legacy clients that operate under the current logic, our hands are basically tied for fixing or improving how “both” mode works.

Ok that’s fine. As long as I am actually getting the cards for the review, how they are indicated in the legacy counter isn’t that important.

It is weird it is sometimes simplified, sometimes traditional though, isn’t it?

Also, all the cards used to be marked solid green (once reviewed often enough), so this is definitely *new * behaviour.