TL;DR: Much better than old beta, but still incomparable to the current iOS app.

I was one of the users who were very critical of the previous beta. I have just spent some time with the new beta and wanted to share my feedback.

First thing I noticed is that performance is radically improved, great! One can still see occasional lags and startup time is significant, but these are not critical issues.

Overall functioning of the app is also improved compared to previous beta. Of course lots of things in dashboard/menus are broken or missing, but I assume you are aware of that. It does not seem possible to edit the lists, which makes the app unusable for normal learning yet.

There are some big technical glitches - from time to time all of the UI reloads; character input (strokes) stops working; due count is different from the native app.

My biggest complaints are these two:

For now I’m going to stick with the old app.

Thanks for the feedback! The main goal of the new beta was to address the largest and most serious issues, performance. We think we have overcome the biggest hurdle with that in the new beta and are happy to hear you r comments about that as well. There are still lots of little things we need to add back in and will iterating rapidly over the next few weeks to bring things back up to par. This includes finalizing some design decisions based on user feedback and also cleaning up the study flow.

Regarding the design we have issues open for most of the stuff you just mentioned and are definitely going to spending time to localize things for iOS. In fact we just purchased a few new devices with that specific goal in mind.

The lack of audio feedback and colored visual feedback really feel like a missing element to me. In the old app they added to the warmth and attitude/expression of the app.

That may be a purposeful, stylistic choice (just like modern industrial architecture versus colonial French architecture), but I miss the warmth.

White & black apps (IMO) are just as fun as corporate gray & beige in cubicles. ;). Perhaps part of it is using an iPad, but from the attached image, you can see it’s just a expansive field of bright white and pale gray with tiny black letters. 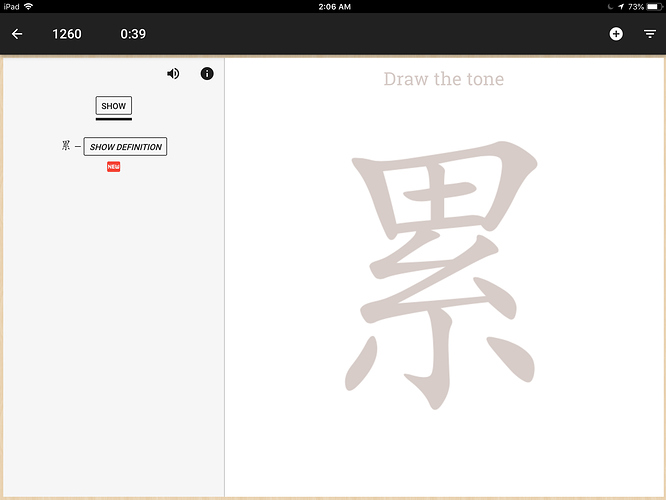 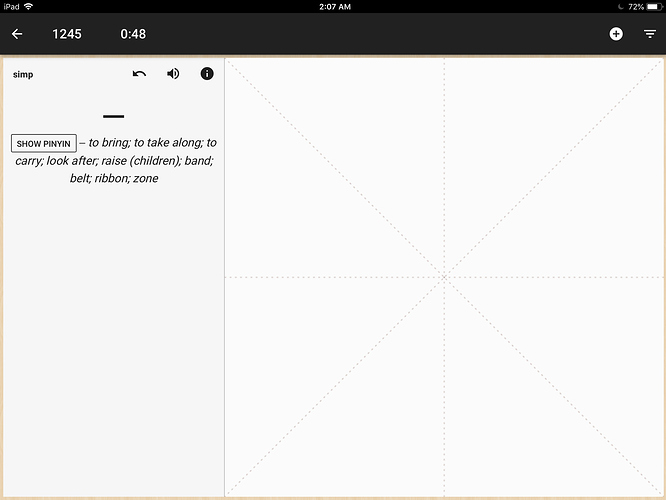 Landscape mode was a bit of a bonus for the early release of this app, and we haven’t spent nearly enough time yet improving the layout, sizing, etc. Basically, it needs more polish.

The whole app needs more polish, actually, and it’ll happen gradually over the next few months as we prepare for a more official release. I’m the one doing lead design on the app, and, honestly, I’m learning as I go. I started getting into graphic design via Sketch, Adobe Illustrator, and Adobe XD about six months ago for another project we’re working on, and I kinda picked up the Skritter project along the way.

I have a lot to learn, but I’m not against putting in the hours and I like to think I’m a relatively quick study when I put my mind to it. That said, I know my own limitations, and I gotta keep other elements of the company running strong, too. So, once we have kinks worked out and things are stable, we’ll probably outsource to a real design team to add the polish on top, but I’ve still got a bunch of stuff I’d like to do with the current version.

It might be a little stressful on the eyes for a bit, but this method does allow us to iterate on things a lot quicker than outsourcing right now.

The lack of audio feedback and colored visual feedback really feel like a missing element to me. In the old app they added to the warmth and attitude/expression of the app.

I feel a bit like a broken record with a lot of my posts, but stay tuned for continued updates and thanks for joining us on the journey!