Any idea when the next Android/iOS app updates are going to be?

It should be within the next couple of weeks, however it’s a bit hard to predict at times when a release would be ready though right now that estimate should be accurate. We don’t want to push breaking changes or commit to dates that can change!

Is this a big update? The app feels really dated now. Especially on the iPhone 7.

Are you using the beta version? https://blog.skritter.com/2017/09/open-sign-up-ios-beta-app/

I submitted my email address; waiting for the email now. Looking forward to trying this out.

Less than a week left, after which the iOS app would likely expire and refuse to open. Any updates when you guys would be pushing an update to prevent this happening? L

@vaultor What sort of problem do you seem to be running into? Something about the app refusing to open?

I’m referring to using Skritter iOS beta version from Testflight. These apps have a shelf life of 90 days after which they will no longer open, unless a new version is pushed through Testflight again.

In short, the apps still work now, but not after they expire. 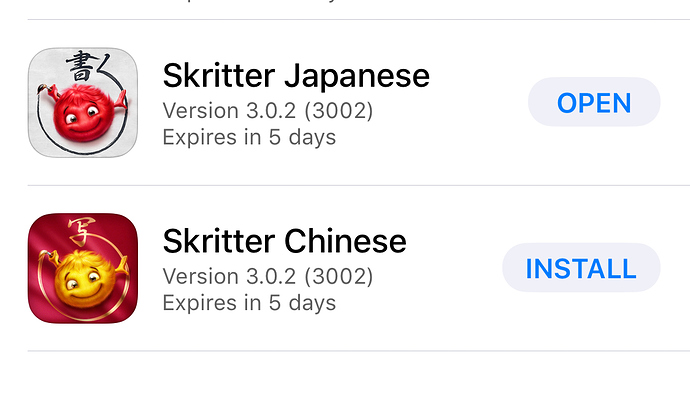 Thanks for the heads up! I’ve notified the developers.

Yeah, I can’t open the app and the build mentioned in the recent email isn’t available in TestFlight.

Anyway, the new design looks clean. Doesn’t seem to have any new features, though. The biggest problem is the back button which is really hard to hit (usually results in me skipping ahead several items and then being unable to go back). And in general, things don’t feel very smooth.

The Skritter iOS beta version app has stopped working for me as it says that it has expired.
I’ve had to download the old version again which feels like a real step back and dated.
Any idea when I can use the new version again?

Got the 3.03 build now. Seems much better than the last one. Less strict on stroke placement seems to be the key.

The back button is better but the problem remains somewhat. Depending on the type of review, e.g. writing vs reading, the position of the button is different. Also it’s hidden until you try to press it. Usually I still end up skipping ahead before going back.

Also, the Chinese text appears to have defaulted to some ugly font.

The problem now is that the reading/definition tests show the definition, pronunciation (in hiragana) and play the sound without the need to tap the icon. When will this be updated?

In addition, the back button does not appear to be working. It just says the last word instead.

The problem now is that the reading/definition tests show the definition, pronunciation (in hiragana) and play the sound without the need to tap the icon.

I get this too (Japanese app) - the only thing I need to recall now is the writing.

sounds like ios updated
is there an android update coming soon?

Glad I’m not the only one.

@Jeremy has this been flagged with the developers?

It’s now on the radar and we should be able to get a fix out soon. Thanks for your reports!

@murkt @notfromhere Would you be able to let us know which type of device you’re using?

Side note: it would be helpful if the beta was named differently to the stable version. Skritter-beta perhaps? That way I could have the regular version installed concurrently.