No Kanji, only Kana

Hello,
In my book, which I use to learn Japanese, the Kanji are introduced later. That’s why I want to learn words in Kana. How can I enter words in Skripper only in Kana?

Words with -masu don’t have “All Results”, as shown in the picture.
Is there another way to use only Kana? 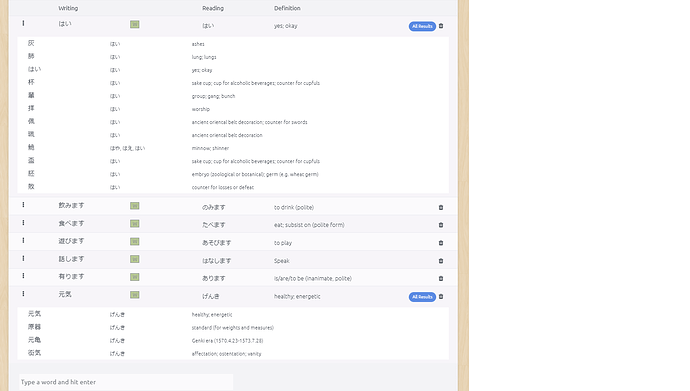 You can add any words as kana only on the legacy site, by using the “All Results” button (which shows up even when there is only one entry matching). Right now the All Results buttons isn’t showing up on 2.0 when there’s only one entry available, so it makes it impossible to add the kana only entry. I recommend using the legacy site to edit the lists in the meantime, or at least when you’re wanting to create new kana-only entries!

I’ve brought up an idea with the team to make studying kana-only items easier. Right now you can toggle the green W mark while editing a list to disable/enable the writing prompt for just that word itself, however this won’t make it so you write kana only and instead completely disables the writing prompt, and reading and definition prompts would still show the writing using kanji for the word itself. A cool idea might be when you disable the W, that it asks if you’d like to study the item as kana-only, so you wouldn’t have to create a new item, and it would automatically convert it to kana when you’re studying any prompt type. It’s something we should think about! This would also mean you could switch the kanji writing back on when the book introduces kanji for the word, and it wouldn’t double up the reviews for having two individual entries for kanji and kana only, and would automatically convert your kana only item to the version using kanji. Since it’d be the same item, the scheduling would also need to be reset for the item if you flipped kanji writing back on, so it’s not grabbing the review data from when you would have kana only on. (So it would be treated as a new item).

The other alternative would be to have 2.0 match legacy’s behavior, where the All Results button shows up for every word regardless of how many entries exist, so you would be able to create kana only entries. This will be implemented at the very least, but I think the first idea would be a much better improvement.

Thanks for your help !

But now I get other problems.

I tried to type words like that. For “tabemasu (たべます)” I get the error message shown in the picture. It works for other words.

There are also some words for which there is an English definition, but not German. If I want to enter a German definition I get the following message:

Hmm, it looks like that entry was flagged as hidden, but I’ve made sure that it can be added correctly now (and added the German definition: essen). I’ve also added the German for あさって：übermorgen.

If the entry didn’t exist yet and you’re the first to create it, you could of course create the German definition right there.

If you run into any more entries giving you problems be sure to let me know and I’ll fix them up!