Not able to reduce number of due characters with new app?

So I’ve been using the old app for a pretty long time until recently (maybe a month or two) - now I’m still missing the progress reports (well daily - weekly, monthly and yearly don’t work anymore on the old app), but love the raw squigs and the general usability of the new app.

What’s kind of driving me crazy, however, is that I don’t seem to be able to significantly reduce the number of my due cards - on the contrary: This went up from like ~500 due to ~1400ish due despite studying 30 mins a day pretty consistently. With the old app, 30 mins/day used to result in being able to reduce the number of due characters to zero pretty consistently over a few days - is this just me having super bad retention? Is this the new spaced repetition algorithm? Maybe a transitioning thing? 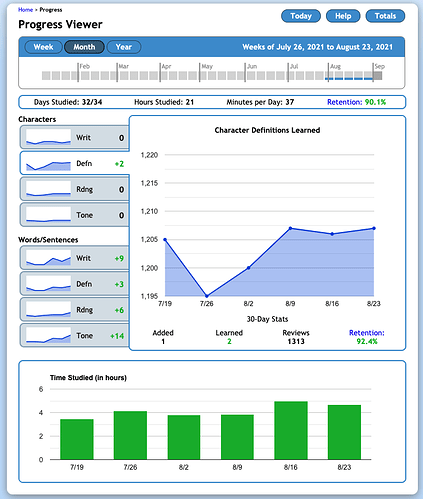 It sounds like what you’re describing is a situation with any SRS system – the longer you study and have items due in an increased amount the more items will be due per day. With that said though, the mobile app versus older clients does work a bit differently which could explain the due item discrepancy.

If you feel like this is a lot more than a slight difference please reach out to us at team@skritter.com – it’s much easier to keep track of what’s going on.