So, I was just speaking to my colleagues the other day about tattoos, and we were talking about how some people ended up with stupid tattoos, and of course, people who don’t understand Chinese getting Chinese tattoos are always entertaining for me.

I once saw a woman in London with 女犬 on her shoulder. I mean, 女犬 isn’t even a phrase in Chinese, but kudos to you if you want to try and tattoo “bitch” on your shoulder lol.

So have you guys seen any tattoos of Chinese characters which just doesn’t make sense, or say the wrong thing?

Would love to know what you guys have come across so far, if any at all!

I would love to hear more about this this too!

女犬 is a Japanese phrase referring to ladies who are in their thirties but still not married.

LOL. I mean still… why would you want a tattoo of that?!

why would you want a tattoo of that?!

By just looking at your message, one can never be sure what she wants to express by wearing that sign on her shoulder. But might it be a feminist statement?

女犬 is a Japanese phrase referring to ladies who are in their thirties but still not married.

Ah, I wasn’t familiar with this! I’ve seen 負け犬 used in this context before or 干物女 (I guess if they’re younger though). Is that じょけん or おんないぬ？

I found a fairly dumb one on Google Images (though it’s Japanese and I realize this thread title is “Odd Chinese tattoos”): 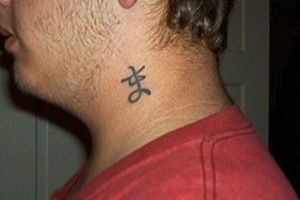 LOL that’s just bizarre to have a single hiragana ideogram and nothing else.

And it’s cool to have odd tattoos in Japanese too… I think the concept is the same: don’t get a tattoo in a language you don’t know lol.

Your mention of 干物女 made me laugh. If you do a literal translation of that phrase from Chinese instead of Japanese, you could end up with “f*ck thing girl” lol.