I got frustrated with doing all this work and not being able to reliably recall the Chinese word for an English meaning. Skritter gets you some of the way there but as others have pointed out, except for writing prompts / hide pinyin (time consuming to fail), it lacks a good way to force you to recall the Chinese word given English. As a result, I could often recall the character but not the pinyin! Frustrating in a conversation, leaving you air-drawing.

So six months ago I switched off everything except writing prompts and wrote my own solution (thanks to the great Skritter API!). Sorry you can’t use it, because it’s not built for multiple users. But here are some thoughts from the experiment.

I think if Skritter implemented this feature it would be a valuable addition.

I have two types of prompts. 1) Hanzi -> english and 2) English -> Pinyin/Hanzi. You answer in your mind, so it depends on your honesty. For Hanzi to English, I mark it remembered if I got the English meaning essentially correct. For English -> Pinyin/Hanzi, I mark it remembered only if I got both the pronunciation and tone right. I ignore the hanzi, since I use Skritter for that.

It saves time, because I have combined the tones and pinyin into a single prompt type. If I get either wrong, I mark it as forgotten.

I had thought that a major problem would be the many words that have similar meanings. There are dozens of Hanzi that all translate to “But; However” or “punctually; on time”. It is somewhat frustrating to disambiguate these. However, over many failed prompts I eventually pick up on the slight differences in the English translation, or force myself to recall all possibilities before hitting “reveal”.

If I were re-writing it, I would certainly add a “hint” feature of some kind. When tapped, this would show some kind of hint, such as the number of characters or first letter as well as apply an SRS penalty.

Overall I now feel confident that I can reliably recall the words that I have reviewed this way. 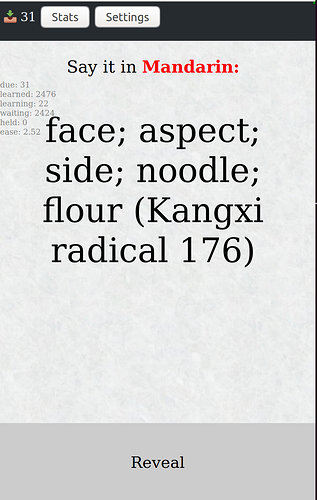 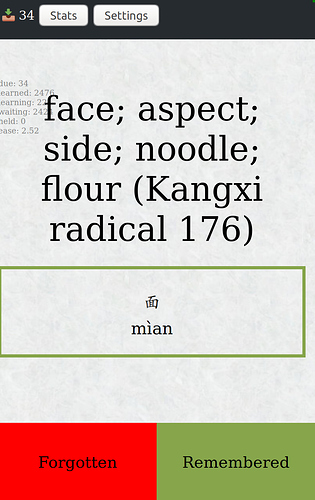 (I feel dumb for not googling to see if Skritter had an API despite thinking how convenient it would be, so thanks for leading me to that. Also: The docs are a treasure trove of answers about how Skritter schedules things)