I just recently realized that legacy skritter web version has sample sentences included and found them very valuable and would like to use it also on my phone. However, when I open the web version on my phone, I cannot write on as every movement is interpreted as an intention to scroll the page [in firefox].

I could not find a fix for Firefox, is there one? Otherwise, is there any browser available that can disable scrolling for pages that cannot be displayed on one page? Or is there any way to modify the css code on the legacy skritter web version?

Thank you very much in advance.

PS: Sorry when I post it under the wrong category. Didn’t find anything that fits perfectly.

What type of phone are you using? The web version is designed for a desktop computer, but there are mobile apps you can download designed for phones/mobile devices.

thanks for your response.

Currently, am using skritter through the Android App with a samsung galaxy s5 mini.

I just realized that the legacy desktop version has the sample sentences (that are also included in the ios app) and wanted to benefit from it. Context helps both the retention and the usage of the learned vocabulary a lot. Using skritter on the desktop computer is not really feasible for me as it would take me too much time to do ~1000 reviews a day. That’s why I try to find a way to access these sample sentences via my phone.

Have you checked out the beta for Android? It has sample sentences! Here’s a link to more info: https://blog.skritter.com/2016/12/new-android-beta/

Finally downloaded the Android Beta App. However, I still can’t access the sample sentences in the app. For all dflash cards (both new and old), there is only a blank line. Also couldn’t find a display sentences button or similar I study settings.

Where can I activate the sentences? 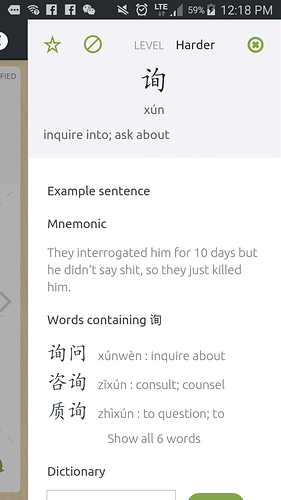 Hmm, the sentences should automatically show in that area without having to press anything. I’ve just tested on my end to make sure they’re showing up. If they still aren’t showing, I recommend deleting the app and reinstalling it to see if it fixes the problem.

I don’t have example sentences in the Android 2.0-beta app as well. I (re)installed it several times (during the last couple of weeks), but it was always like this. I thought it’s just another missing feature in the beta (like the character decomposition), which will be added later.

You can also see it on my screenshot of the mobile web-app.

This is fixed for me in the latest update (2.0.4). Example sentences, but not character components.

Sentences are now also displayed in the infortmation box. Thanks for fixing!