List navigation doesn’t remember where I was. For example, go to the decks tab, Browse, then search for “practical”. Go into New practical Chinese reader volume three. Next hit the “back” arrow in the upper left. Skritter reloads all lists, instead of taking me back to my search results. My search is lost.

If I delete the app and reload it, the “hide definitions” setting gets forgotten and is always turned off even though I changed it manually before deleting the app. All my other settings are remembered.

Love “rawest squigs”! It would be really nice if I could just tap the screen to check my answer, instead of needing to hit the button at the bottom, which is really difficult on an iPad. If I then want to mark my answer green and Move on, it would also be nice if I could just tap the screen again and have it move on.
Edit: Aha, I just realized that AFTER you reveal/check your answer and then tap the drawing canvas, Skritter will move to the next character. It does not SHOW me it marked it as Green, but when I go back to the prior character, Skritter shows it as Green. So, I don’t know if it’s a bug or feature. It would be nice to display the Green status BEFORE moving to the next char.

For some characters, the new “submit correction” option is almost scrolled off the screen, as per the attached image, in which you can just barely see the top of the characters at the very very bottom of the screen.

Edit: you can not scroll it so that it stays on the screen. This is scrolled all the way to the bottom. 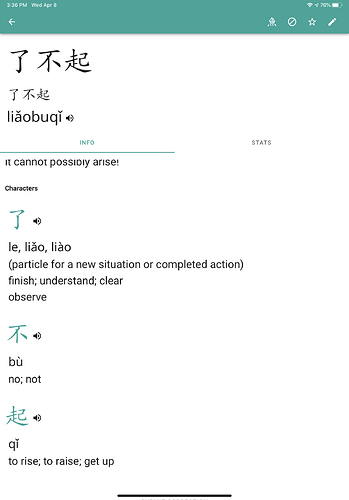 If you edit the definition of a word and tap in the edit box twice, it scrolls the “save” button off the top of the screen. One can tap outside the box and get the button back, so there is a workaround, BUT it’s not obvious.

Edit: If you tap the Mnemonic box, it scrolls The definition box off again too. 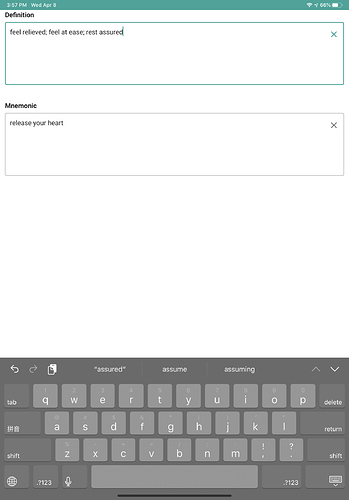 Is there a way to permanently hide the mnemonics on the info screen? I understand people love them, but they are so bizarre sometimes with ALL-CAPS SCREAMING often embedded in them, that I find them extremely distracting on the info screen. I like the character breakdowns, which are slotted at the bottom of the info screen, so it’s impossible to “not” see those awful mnemonics. 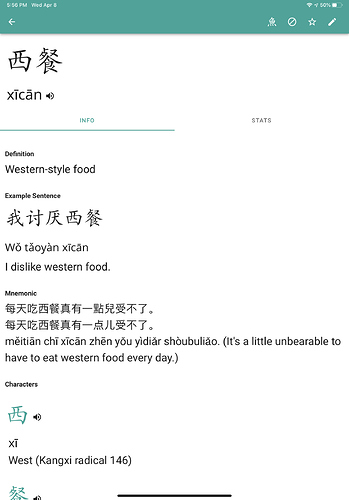 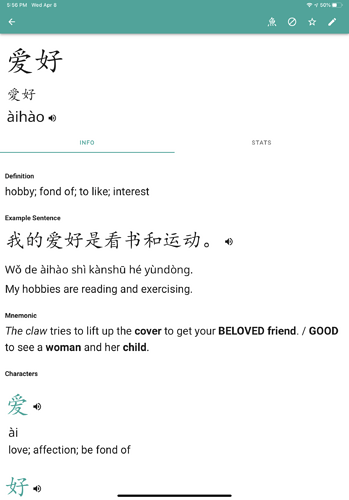 Having a toggle to hide popular mnemonics seems totally reasonable. Will add it to the notes! And thanks for the other feedback as well. We’ll dig into it and see if we can’t improve some of the things you’ve mentioned. Gonna be doing a patch update for 3.4.0 at some point in the near future once we’ve gathered a bit more data.

On a multi-character prompt, clicking the new “word-grading” button beside the prompt does not stop the countdown auto-advance timer.

Please make the auto-advance stop of zero out when the grade is changed for the word. (I.e. the same as it does for selecting a new grade button for the character)

Can certainly look into this and see if we can improve it in the patch update. In the meantime, you can tap the canvas area on tone and writing cards to pause auto advance, which will save you the trouble of tapping the back arrow to make any word-level grading changes.