I’m not sure how to get this working like that. I have it currently set to test me on “writing” only (of the various options). This sort of satisfies point (1) mentioned above, though sometimes I’ll get something like this (on my android): 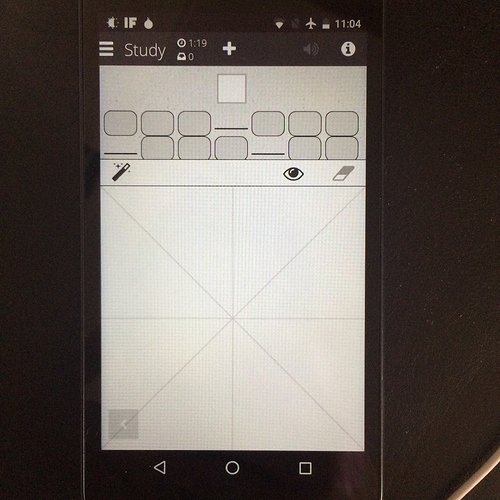 …where I’ll have to scroll down a bit to reach the Heisig keyword at the bottom:

Is there any way of getting it to stop displaying whatever those blocks are up at the top so I don’t have to scroll?

And is there any way of being tested on point (2) along similar lines?

Thanks for your help.

I have also noticed some sync issues. I have an iPhone and an Android phone and the number of ‘due’ cards is never the same. Though that is less of an issue if I just choose one device, I guess.

Continuing the conversation with myself –

– I’ve solved one of these problems by unselecting the “hide reading” option in settings. This makes everything more readable and the screen more useful. Now I just need to figure out how to get a test from the character to the definition.

A test from the character to definition, these are called “definition prompts”. It should prompt you with the character or word writing alone, and then quiz for the definition. It looks like you currently only have writing prompts enabled in your settings-- you can adjust that via: http://www.skritter.com/account/settings-study

That doesn’t work for me. I have enabled that setting several times, but it does nothing. Maybe a bug?

Ah I see what’s going on, the RTK list you’ve selected only contains “comp” single characters, which only contain writing prompts. If you select a different list which also contains definition prompts it will add them successfully. Unless you have a specific idea with the RTK, I highly recommend studying the JLPT N5-N1 lists!

I’m just going to learn the writing and definitions for all the Heisig book 1 and then return to the other parts later on. I had assumed I could do that with Skritter. But it appears not so I’ll just use Anki for the definitions, then. That would work.