It would be really helpful if when looking at the list sections, if you would display the “banned” icon on a list section if the section contained any banned words.

I often ban words when first picking up a list, and then months later want to remove banned words from my lists. But there is no quick way to check a list for banned words.

I know I can look through my banned words in the My Words section, but I’d like a usability tweak to allow myself to see that a section of a list contains banned words without needing to go through each section one-by-one. 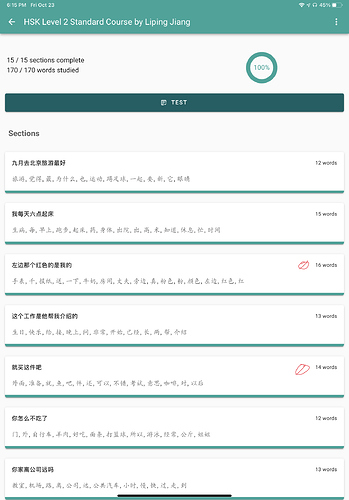 I would say using My Words might be easier to bulk unban things versus going into the list itself, though I do see the use case! To me though it sort of looks like the entire deck section is banned since there’s not an indication of what words are banned (and it’s at the section view level).

TL/DR: How do you “learn” a previously banned word after unbanning it, since there is no “learn” option available?

The specific use case was this: I remember “banning” a bunch of holiday-related words when I came across them in a list that I was using a year or two ago. I have 20+ lists, and add/learn words based on whatever I’m interested in at the time.

Now that it’s near the end of the year, I wanted to find the list with those words on them and see what they were and if there were any other holiday-related words in that section. But I couldn’t remember WHICH list, nor what section. (It ended up being in a section of Edition 2 of New Practical Chinese Reader, Volume 1)

When I ban words, I tend to do that BEFORE I’ve added them to my vocabulary. If a word is banned BEFORE learning, it doesn’t show what list it came from in “My Words” when you filter just on Banned items. The “Stats” tab just says that it wasn’t added and there is no stats to show.

I can then unban the word. BUT THERE IS NO WAY TO LEARN THE WORD, unless I track it down in a list.

But I thought to myself: wouldn’t it be nice to be able to SEE graphically on the Skritter list interface some info about WHERE the banned words would be.

I thought it would be a simple, graphical, NON-functional-code-writing tweak (i.e. didn’t change any functionality of the tool), and hence would be a low-hanging-fruit add-on. Maybe lists don’t track their own banned items, but when I “load” a list, it seems to parse “something” already.

My suggestion of putting a ban icon was just a suggestion. It would be “better” if it said something like this for a list section "14 words / 3 banned words’.

So, the problems I faced were:

1). I know I banned some words about a topic, but I don’t know the Chinese. I have no way to “search” for the words in ENGLISH within my Words nor in the lists that I have.
2). I have to manually search my entire banned words list and read the English definitions to find the words
3). I banned the words BEFORE learning them, so there is no way to back track the banned word into the original list
4). Without having them ON a list, I can’t “learn” them later on until I find them.

So, it’s a bit of a vicious circle to track down and “add” banned words UNLESS you can find WHERE on the list they were.

And that’s why I had the idea of the icon to SHOW me and give me bread-crumb-pointers to where areas on my list are.