Reset progress, but it didn't completely

Hi, I’m going to get back into Skritter, and just renewed. Since it’s been a couple years, I went into the 2.0 site and reset my progress. My system is iOS, so I plan on using the Skritter Chinese app, based on my understanding that the 2.0 really isn’t ready for prime time, nor is it guaranteed compatible with iOS.

After three “this took too long” responses from the 2.0 site, I manually deleted all my study lists from my queue and then reset my progress for a fourth time, which seemed to work. However the 2.0 site says I have 98 items to review, and if I try to study it shows no words added. The legacy site shows the correct number of items (zero). Additionally, the 2.0 still shows 400+ items in the “All Time” section of the dashboard…which I had also expected to zero out, but did not.

I then redownloaded the iOS Skritter Chinese app, launched it, and then watched it synch 1039 items. I hit “Study” and then it went to the next screen, proceeded to tell me that there were no words and I needed to add some, and then flicked back to the main selection screen. Up popped a message saying my account had been nuked ( a good sign, I thought), but then it said it needed to sync…and again synced 1039 items…just a mere 15 seconds after the last time it synched.

The app seems to be working now, but I wanted to report its odd behavior and the 2.0 site’s odd counts.

In these cases, I would have expected the 2.0 site to: a). be able to reset with the reset button (which it couldn’t until I manually removed my lists); and b). Reset counters back to zero in all places

On the iOS app I would have expected a fresh install to not sync anything at all; and then not need to resync the same stuff less than a minute later.

EDIT: I also just noticed that any “custom definitions” I’ve added or altered in the past are still appearing. How can I reset “EVERYTHING” back to a new state? I want to start completely fresh with no “contamination” from my last attempt.

I had this same problem with the reset button not resetting to zero. The devs had to manually reset it for me. So I’m sure they can do the same for you.

Hey @Apomixis I’ll try to help and clarify a little. Skritter 2.0 is compatible with all the other clients. In an effort to speed things up, we’re using a new data layer for some things, and that sometimes get out of sync. We’re constantly fixing and improving that and making it more stable, but account reset is one of those trickier edge cases where a lot of things change quickly, so sometimes it doesn’t update correctly. I’ve got some solutions in the works to bulletproof it, but right now the extra cleanup steps are manual from my end. Having said that, I’ve re-transferred your items, so the 2.0 due count appears to match up now both in the database and the app.

If you’re still seeing custom definitions, etc., and it’s bugging you, the most foolproof account reset right now is at http://legacy.skritter.com/vocab/deleteall. Let me know if after that (and an ios sync!) things still don’t look right.

Things look good after the transfer and both the iOS app and the 2.0 site match. Thanks @SkritterMichael for setting up the back-end changes manually!

A couple things I noticed:

1). Using 2.0 on iPad Air (latest iOS), in landscape mode on Safari browser (default for iOS), the scaling of the Study mode screen is too large for the screen. It fits maximally width-wise, but cuts off top-bottom content. Portrait mode works fine, but I almost never use Portrait mode…except the Skritter iOS app forces only portrait…I’d really like to use 2.0 in landscape. 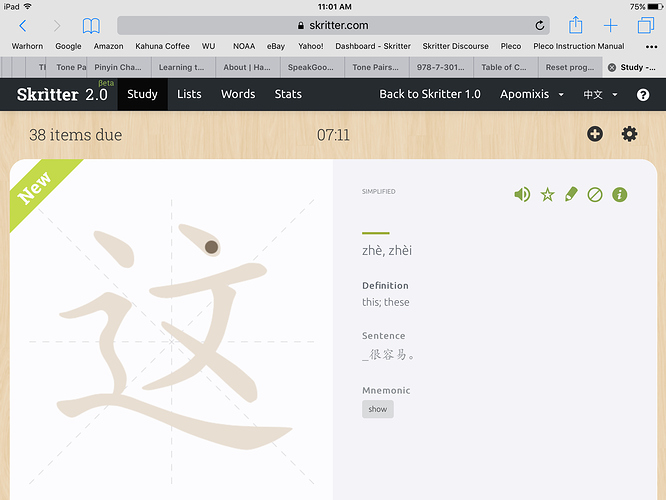 Even turning off Safari’s tab and favorites bars still has the bottom cut off: 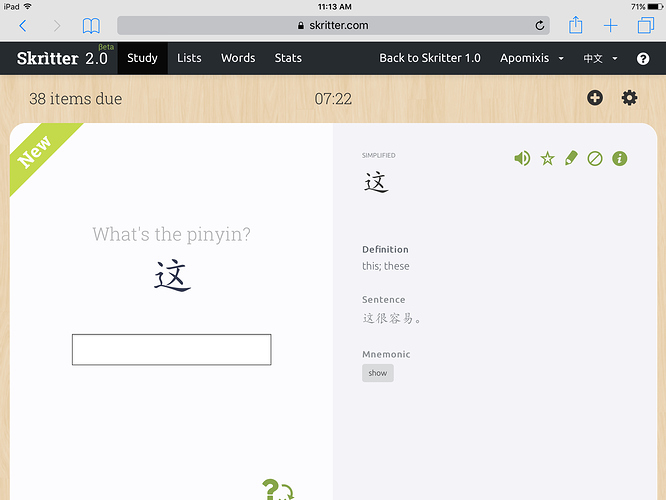 2). In 2.0 I really miss the sounds that the iOS app makes when auto-transitioning to the next item and when marking an item right-wrong. Are those gone completely or can they be turned on in 2.0?

Will look into the resolution problem for iPad Air, thanks for pointing it out! And while we don’t currently have sound effects in Skritter 2.0, and it wouldn’t not the highest priority addition, as long as people like you want them, I see no reason they can’t be added in as a user setting at some point.