are there amy future plans to add a sentence filter in review mode, to be able to include and exclude them from daily reviews?

Do you mean to include example sentences for words as their own item which could be studied like a word?

If what is meant is “cards” entered as a sentence instead of as a word, I also hope there is a way to both include/exclude them in reviews, as there is in the OG app

Ok, gotta ask: what does “OG” mean? I’ve never seen the term on this forum until you first posted and you use it a lot. I get from context it means the “old/original” app, but what’s the term mean?

@Therebackagain got it right. in my decks added al lot of cards as sentences using the legacy website. someltimes i want to exclude them and focus on the vocab because sentenses can be very time consuming.!
similar to the below. the below check box filters out the sentenses when adding for study. my requested is to filter out added cards.
20190924_234039|236x500

Apomixus: “Original Gangster”. (From a song by Ice-T. ) “ OG is a slang term for someone who’s incredibly exceptional, authentic, or “old-school.” …” OG used to mean [Original Gangster] although some people these days use OG as a quicker way of saying Original”

If what is meant is “cards” entered as a sentence instead of as a word, I also hope there is a way to both include/exclude them in reviews, as there is in the OG app

How are you able to include/exclude sentence cards on the Skritter Chinese (iOS or Android) mobile apps? I wasn’t actually aware that this was something you could do, so I’d love to learn!

P.S. in team conversations we usually use the term “legacy apps,” but have certainly said OG apps as well from time to time. 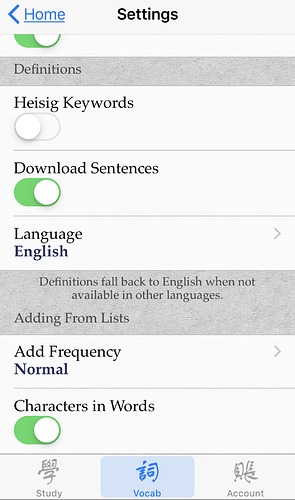 @SkritterJake I think this is the way it is done. Can’t remember, set it so long ago. May have done so from website instead?

Yes it is from the website. I remembered I did it once as well. I went to the study settings of a deck, and clicked “limit sentence parts”, then when I added words from that deck to my android app it excluded sentences from downloading. I didn’t like the fact it only excludes new sentences. Already downloaded sentences could not be exluded.
A feature will be nice in the review page of the app to have another tick box that includes/excludes sentences.

I still get new sentences but only the definition component. That works well for me. Writing, pinyin and tone parts of sentences on the mobile app are excluded by turning on the website feature.

Absolutely want this feature brought back in future versions of the new app.

It is odd that the Skritter folk chose to exclude so many valued features of the legacy app while introducing new features. Don’t break a good product - improve it!

It’s not a choice to exclude, though! We unfortunately can’t recode everything all at once and have to choose which features to focus on first.

It is on the way