Using the new app, I got – for the first time ever – the simplified version of 曆. It was a tone card; the side bar only listed statistics for the tone and reading. I noticed in my word list, both 曆 and 历 were present. It was clear that they were drawing from the same statistics, but like in the sidebar 历 only had entries for the tone and reading statistics unlike 曆 which had all four. I banned 历, but it’s concerning:

Thanks for the report. We’re looking into the issue. I can see 历 on your account, and we’re in the process of figuring out why that is the case!

In the meantime, if you see some other items in your study queue that are in simplified toss them on here so I can add them to the debug list.

Good find. An issue has been opened for this as well!

I haven’t noticed this specific symptom before, but I’ve only recently been giving New Skritter another try. As far as I am aware, simplified versions of all traditional characters I’m studying have always appeared in my list. I assumed that was just a side effect of how they were presented.

One thing I noticed right now is that in the legacy UI simplified versions are greyed out in the list and don’t have the green “This word is in your studies” checkmark on their info card, and instead have a blue button letting you add them. Unfortunately I don’t know what state 历 was in when I banned it; currently there is no icon or button there; perhaps because it is banned.

This detail is very useful, and is missing from the current web site. Quite to the contrary, the new web site shows me not just less detailed but incorrect results. e.g. When I search for dian3 the current web site says I am studying 点 but not 點, when in fact I am only studying 點. (Though clicking on 點 shows that I have indeed studied it, and only 點 has glyph statistics.) Meanwhile the legacy web site is correct.

It all stems from the fact that our database was written with simplified Chinese as the base. Many hacks have been put in place overtime to try and sort out the madness, but the hacks are not in the v1 API that is serving the website, which means things can get funky on Traditional. We’ve since switched to a new API for the mobile client, but it looks like there are some lingering issues. I’ve seen it a few times on my account as well, but I’m pretty aggressive about banning things, and I actually thought we had it patched up!

With regards to 點/点, when you search for words on your account you’re also searching Skritter’s entire database at the same time. So, in the instance of “dian3” we’re returning all results, and you’re seeing stats for 点 because you’re studying it in the sense that the definition and reading are drawn from the base vocab (the simplified). If you search 點, however, you should get the real stats including the writing. This can be handled a lot better on the interface.

The day we invent time travel, I’m going back in time and telling Nick, Scott, and George not to build the database this way…

So when I review 同, it shows the simplified definition, which includes ”alley; lane", which is actually a different character in traditional (衕) and shouldn’t show up for 同. 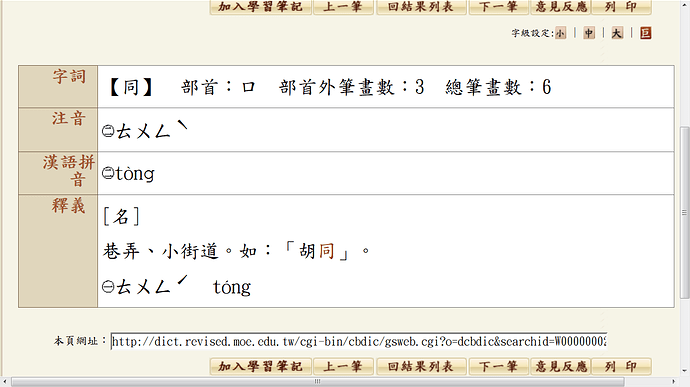 Good catch! I think I’ve only learnt the other version, which is also the main entry in the MoE dictionary (胡同 says “北方人稱小巷道。參見「衚衕」條。”). Searching for it is a bit tricky, because it does of course refer to something in a region where traditional is not used, but it seems common enough. Thanks for pointing this out!

Anyway, this is still a relevant example, because the Skritter entry for traditional 同 does not include this definition (“alley; lane”), yet it does appear when I review the character. This is one among about a dozen examples I’ve found so far. It seems to serve simplified definitions for these characters.

@powelliptic Things are looking better now on our end, how about yours?

@powelliptic you might need to refresh your local data to see the changes, btw. @SkritterOlle reported things looking much better on this account, and the few test cases I had on my account appear to be showing the correct definitions.

That’s great news. I’ll keep an eye out for those characters. I think I’m due to see one in a day or so.

@powelliptic you might need to refresh your local data to see the changes, btw.

Good to know; I probably would have missed the update otherwise.

Looking good: 餵 came up today, with the correct definition.