You should be able to send the screenshots from your phone. (You might need to attach it to an email, and then email it to yourself first so you can access it on the computer, if whatever client you’re using doesn’t allow you to choose the image directly from your phone).

What do you mean by client when you said “if whatever client you’re using doesn’t allow you to choose the image directly from your phone”?

Is the upload button on certain Android phones but not others?

Ah, I mean if the browser you’re using isn’t allowing the upload directly from your phone’s storage

If you’re wanting to upload an image on a discourse post, there’s an icon which you can press to choose to upload a file. (This is the part I’m not sure whether it will work as intended on your phone).

I can only see that button if I have my phone request the desktop version. It’s very unpleasant using desktop mode on mobile. You can see in this screen shot the button isn’t there. 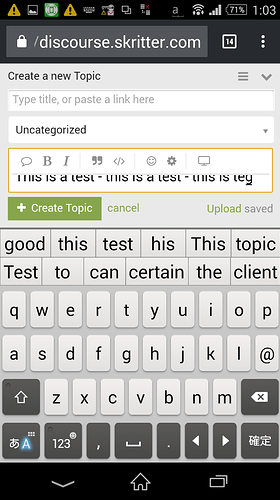 I posted this from my phone by requesting it show me the desktop version. It would be so much better if I could do it on the mobile site.

On your screenshot there’s Upload button on the right-top from the keyboard/suggestions. That’s what you’re looking for.

Thanks, that’s a big help.