Skritter is adding traditional characters instead of simplified

Background: In the past I have used skritter to study traditional characters, but I have now switched my settings to simplified characters ONLY - as I prepare my HSK exam.

Issue: As I go through the HSK 5 lists in learning and test mode, everything goes smoothly. However, when I go every into review mode, the same characters I just learnt in simplified form now appear in traditional form! Has anybody else experienced this? I would like all my characters to come up in simplified form.

When you change your character style setting it isn’t retroactive, so any characters that you’ve already added in one style will still show up in that style. You can ban the characters / words though that do pop up as you study!

You could also reset your lists on the website to have them add back from the beginning to make sure that any parts that were skipped before the setting was changed are added into your studies.

@Jeremy On my phone character style changes most certainly are retroactive. (To clarify, I use the new app. In my old app changes were not retroactive.) I have been taking advantage of this by first finishing my queue, then changing from simplified to both to get a new queue and after finishing it I go back to simplified to be able to add only simplified characters. It is a bit clumsy but it is one of the great things in the new app. I should also add that without it the new app would give me unnecessary troubles. Since the text signaling that a word/character is traditional has been moved away from the canvas I don’t pay attention to it, and consequently always try to write the simplified. But doing one script at a time is better in every possible way. So please don’t remove this feature if it is caused by a bug.

Also make sure that you reread this sentence from the original post: “However, when I go every into review mode, the same characters I just learnt in simplified form now appear in traditional form! Has anybody else experienced this?” Sounds to me like the app is making @kjkjkj review (traditional) items that were never added. Or did I misread something?

I just wanted to jump in to explain expected behavior on the website and the apps.

If you have an account set to simplified and you change it to traditional, any characters you’ve previously learned that don’t have any variations will remain learned on the deck level and will be due for review in the queue. Characters/words that have variants will be hidden from the due queue, and they’ll be ready to learn on the deck level (unless you learned them in the past). The same goes for when you’re going from traditional to simplified style.

If you go back and forth using this setting you can study simplified and traditional in batches, which it sounds like you’re doing @Procellis

On the website, we do give you the ability to either continue adding in the new style from your current state, or restart decks (and fill in the gaps). The reason for that is because the website needs to point to specific sections for item adding, and the default is to just keep adding from whatever section you’re currently on.

@kjkjkj if you’ve previously learned traditional stuff and then switched to simplified they’ll still show up as Jeremy mentioned depending on some old app settings. You should be able to override this here: https://legacy.skritter.com/account/settings-study by changing your study style on your account to just “simplified” rather than “simplified and previously added traditional” 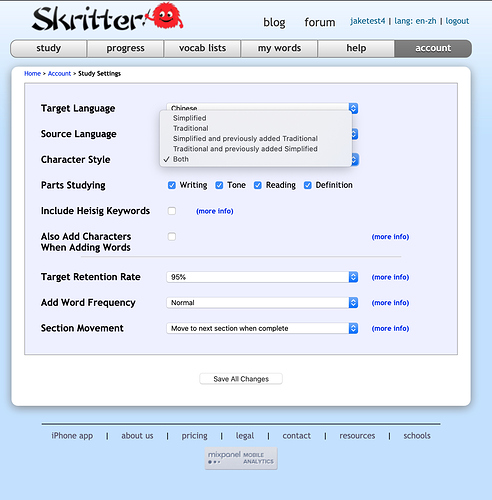 Hope that’s helpful, and good luck on the HSK test!