edit:
below is the old main post. This has become a big problem since yesterday. Today it must have occured more then 30 times already and its really disrupting my learning today.

For me it occasionally occurs that skritter gets stuck, I do not see the big part of the last card anymore, the saving animation plays and no matter how long i wait nothing happens. Only a refresh helps (I have once tried to leave and come back a while later). This problem is new, it has occurred the first time within the last two weeks and has been plaguing me since then. 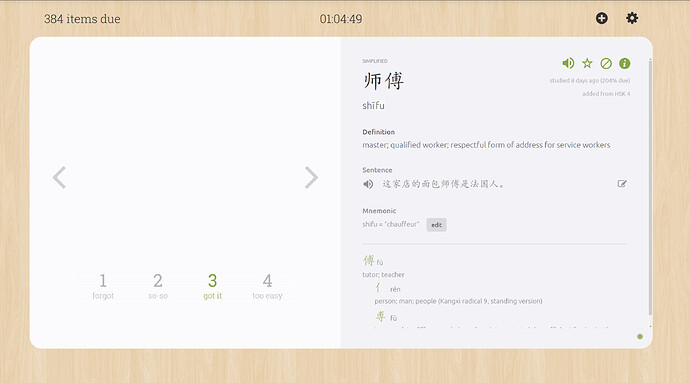 Every time an error along this is displayed in the console: 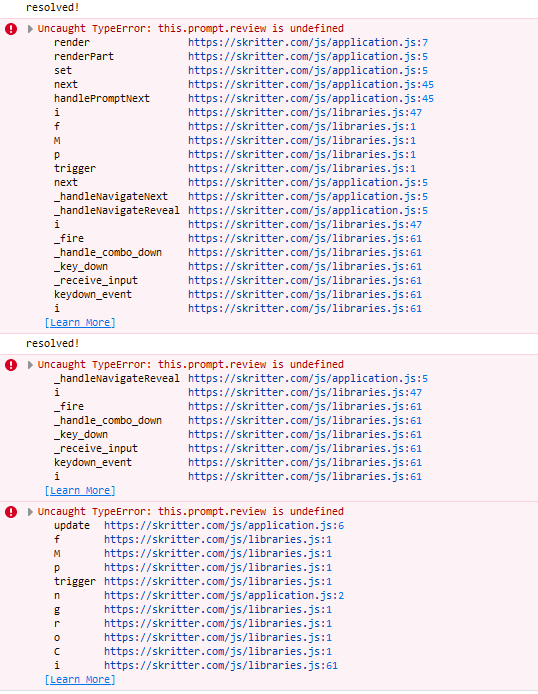 Another instance, this time it actually does not save, thats a first and the reason why I am posting this here. I cannot click the save button or next button, doing so does nothing 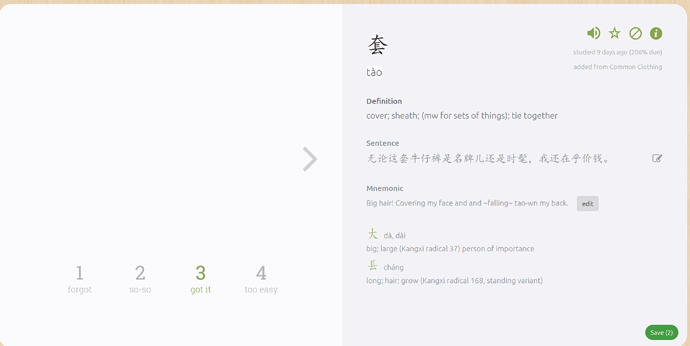 I clicked a couple buttons so there are a lot of errors.

I dont know whats going on today. Usually this is not a big problem. happing at most 2 or 3 times a day. But today i get it consistently after 2 to 10 cards. I already tried things like deleting my cooking, disabling addons to no avail.

edit: it just keeps happening. i might have some corrupt card or something?!

I have tried my best to collect more information:
It does seem like there is some card with corrupt data. I my test i was only studying tones.

I went over all the lists one by one and studies them until i finished all items and then continued for another 20 and the following result has yielded:
Studying HSK3 or ‘Important words missing or delayed in HSK’ results in skritter getting stuck.
Studying HSK1, HSK2, HSK4, Kitchen, Common Clothing, TOCFL Level 3 and two private lists called Glossika, iTalki Lessons does not result in Skritter getting stuck.
Due to another bug i already reported I could not test TOCFL Level 2.

The last time I have used the mobile app to rejuvenate items shared across those list was about 2 weeks ago, so it is not possible to say with certainty that the problem does not occur in any list I did not finish studying yet besides for items that are makes as learned in said lists. (relevant unfinished lists are: HSK4, Kitchen, ‘Common Clothing’, TOCFL Level 3 and my private list Italki Lessons)

So what i can currently say with certainty:
There is at least 1 item or more occurring in HSK 3 and ‘Important words missing or delayed in HSK’ that cause the issue. If it is 1 item, the item must be shared between the lists or a hanzi used in words in both lists. If it multiple items they could be shared or just occur in both lists.

Also it is worth noting that the problem occurs in HSK 3 which i finished studying month ago. The problem occurred the first time 2 weeks ago. so it must have been a change that happened to HSK3 within that timespan. However it most be noted that i was depressed during december, so I might not have studied enough to notice the bug in December, early January

Hi, we have a couple error logs that seem to match up. We will investigate and see if we can find the weird data.

I did a somewhat motivational break and the problem occurs again. as of now i did not do the same testing to restrict it to a deck, but it makes revising tones with no deck selection on impossible.

Edit: i can testify that the error now also occured with HSK3 and Missing/Delayed in HSK disabled