When I have a multi-character word, and during a writing prompt, I’m seeing some “bad” behavior. Or at least it looks like something it wrong.

Unfortunately, I didn’t screenshot it.

Later, I have another Prompt where I had a two character prompt. It graded the first char as green, and autoadvance. I didn’t like it, so backed up and graded it yellow. Then I advanced and wrote the second char. The grade was green for the second char. BUT the overall grade for the word is still GREEN. 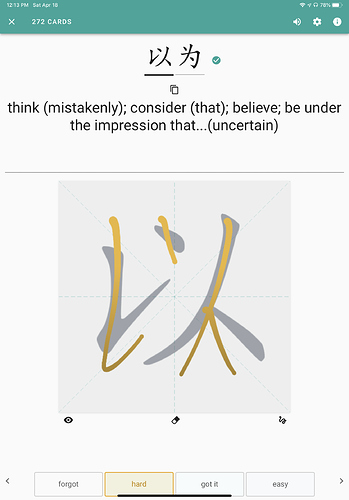 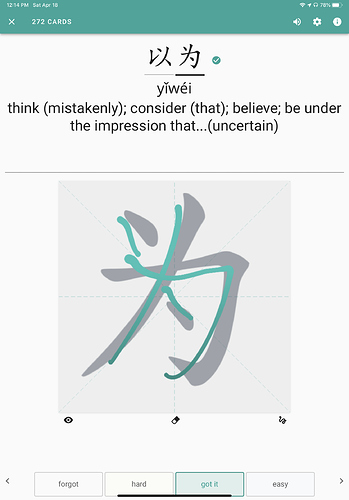 Here’s an example of a tone prompt showing three characters with grades of yellow, green, green, but giving the word an overall BLUE.
To me, that is concerning. Blue puts things TOO FAR in the future and my brain does remember them that well. 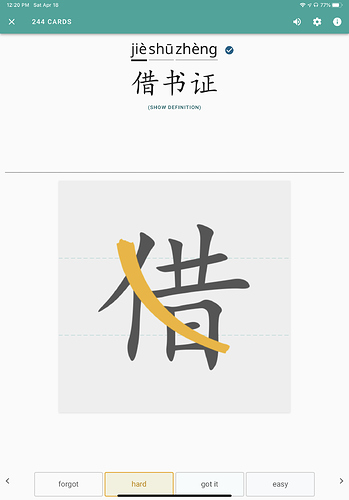 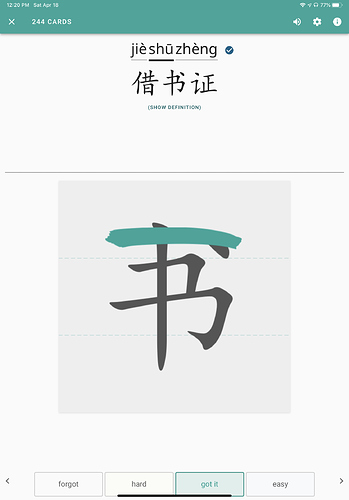 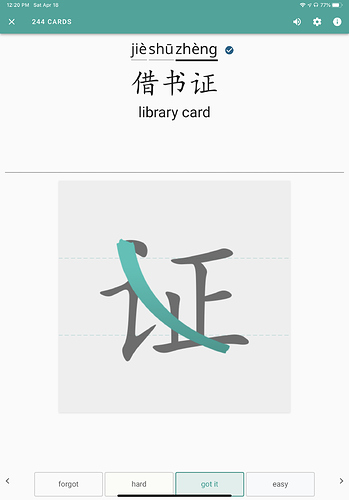 Here’s a related issue. I got a prompt incorrect, and graded it as red. I happen to check the stats page. Then I though, hey, since I got it wrong (marked as red), I should be able to restart Skritter, the prompt will come up quickly, and I should see my “wrong” show up in the stats. But it doesn’t show up that I got this wrong.

Why not? Is it database timing? 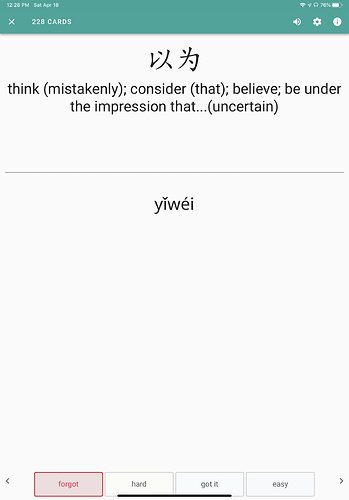 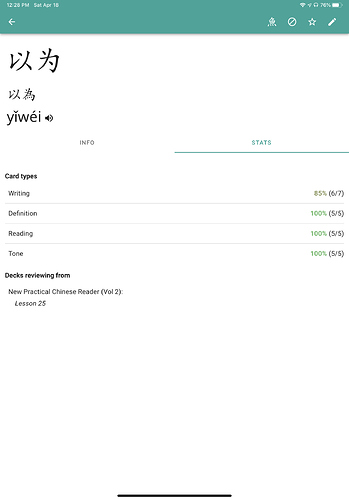 I then stopped the Skritter session, exited the app then closed the app. I then restarted Skritter, and began a review session until I hit the word again. Looking at the stats page, there was no change! I would have expected to see my RED cause the stats to change after getting the PinYin wrong? 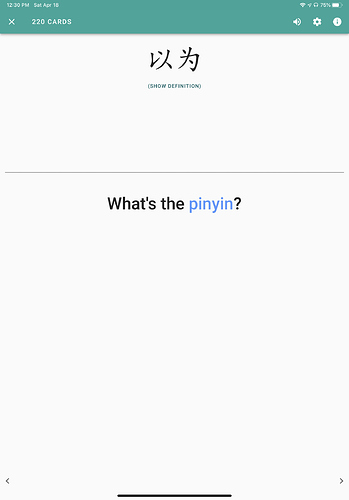 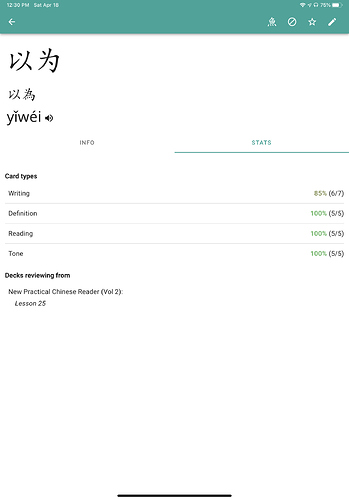 Thanks for all the details. It is strange that your stats didn’t change at all after the session. It would suggest that something isn’t syncing properly on your account. The fact that the item isn’t coming back early in the next session is also suggestive of this.

I would recommend upgrading to the latest iOS beta 3.4.1 (300386), which was just released on Test Flight, and doing a fresh log in on your account. Btw, we’ve affectionately been calling it the Apmixis patch internally because of all your great 3.4.0 feedback

If you’re still seeing the Pinyin/Definition grading issue after a fresh install post below so we can investigate!

We’ll look at the word-level grading and see what’s up. Could be a flaw in the logic when going back to change grades, or maybe just a typo in the code. We’ll dig in!

@Apomixis I moved this into “Skritter Apps” category since it all appears to be directly related to our mobile client.

@Apomixis I’m testing on the latest build marking things hard, hard, got it and various combos and I’m not seeing this issue. Grading appears to be working as I would expect.

Can you try the latest beta build and see if this is still coming up?

Something was definitely wrong with the sync. I deleted the production app and installed the latest TestFlight beta and logged in.

Immediately, I saw the number of reviews due were the same as they were at 10am (it’s 3:20pm now). The reviews were still proceeding in the same order as this morning, so it looks like nothing synced from this morning’s session.

It’s weird that a synch problem would cause word and character grading to go awry though. Is there any diagnostic that is supposed to fire off when there is a synch problem? Keep-alive? Heartbeat check?

I’ve never seen that behavior before of the grading going wonky. I had been watching YouTube videos and reading Apple news right before my Skritter session, so my internet connection was working fine. (And my kids also ALWAYS IMMEDIATELY come find me if THEY see the slightest internet problem!!

However, things look like they are working with the Beta app.

I did notice that when I try to log into my account on the App that Skritter is still not accepting the Apple password manager input correctly. It shows the data being entered, but when I try to submit the credentials, Skritter says the password is not present even though it was entered into the GUI. Current workaround is to have the wallet put the credentials into both the username and password fields separately (I.e. two authentications with the password manager). Annoying—but low priority since it only requires a log-in once per install.

Edit: I still don’t see the stats pages update with a single Skritter session, but if I quit and come back in, they are changing now.

Glad things are working! We did see some strange RayGun error logs with the production build that we’ve since patched in the beta. Excited to get this out to everyone as soon as we can.

Edit: I still don’t see the stats pages update with a single Skritter session, but if I quit and come back in, they are changing now.

What happens if you press the refresh/force-sync button on the Progress? Progress screen still uses our v1 API at the moment, and it can be a little slow from time-to-time when there is a larger queue of data to sort and save. Generally it’s not that the data isn’t loading, just that it takes a while to properly update (I’ve seen it take more than 10 seconds in some instances. Can’t wait to get on v3 API for this stuff).

By “stats”, I mean the new “stats” tab for each individual word…not the progress tab information.

It appears to me that the stats for individual words are only updated when the Skritter session is restarted. I had expected them to be updated on that pane instantly. So, for example, if I started to review a word and then looked at the stats page, and then marked a review wrong, and AGAIN looked at the words stat page, I would expect to see the review I just got wrong showing on the stats. But that is not what I see. The stats page for words don’t appear to update until I quit the app and restart it.

I don’t know if this is intentional design or a bug.

Ah. I understand. This is currently by design. Because we all have the ability to go back and change grades on prompts the final grade for each card is not immediately updated, and submitted in batches instead to reduce the total server calls that could be taking place on the client while studying.