Maybe it’s a problem with the beta, but I suspect the problem lies somewhere else.

Unfortunately I don’t have screenshot from all occurring issues.

Sometimes the app will prompt the wrong tone (see screenshot). 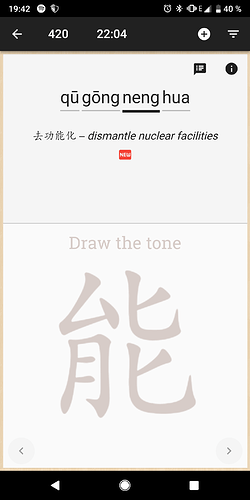 Sometimes words are missing in the Pinyin 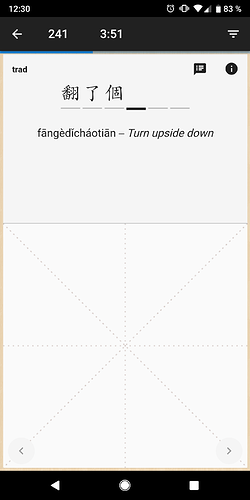 And sometimes the Pinyin spelling is wrong as well, no screenshot, though.

This happens just with a tiny fractions of the words in my list. It seems it occurs rather with newer words.

Thanks for your report! Would you be able to post a list of entries that have issues you’re noticing? I’m suspecting they are wrong in the database. I’ll look into it!

Sorry for me taking so long to reply. I thought I’d first “collect” some words, but than came in life and I didn’t study that much either.
Ok, one more 成语 would be 学而不厌. 不 shows as 4th tone, even though it should be 3rd because of 厌.

一 and 不 showing up with first and fourth tone respectively is normal dictionary practice, although we usually strive to list them as they are actually pronounced in context. However, 不 never changes to a third tone; I assume you mean a second tone?

of course, I meant the second tone

The 一 thing is more annoying when it comes to the “autoplay default character sound”-bug. My guess in 60% of the cases the prompted pronunciation is wrong…

猴儿精 asks for the second tone on 儿, even though, as 儿化, it has none

It would be nice if it were consistent one way or the other. Trying to remember which oddities use tone changes and which don’t in the reviews is annoying. That means if the plan were to use tone changes, ALL items in the system that need tone changes should apply them.

I was just reading this out of curiosity and it’s never actually dawned on me to remember tone changes etc. It just happens when I speak, but I think that’s the major difference between L1 and L2 learners. It’s interesting because I actually had to purposely slowed down my speech of some phrases to work out what all this “tone change” is about lol.

For example, take 火車 (train) and 火腿(ham): I have never actively thought about the rules of the different way the third tone 火 is pronounced depending on the combination… it just happens in my head without batting an eyelid.

Speaking in real life is no problem for me either, that’s probably one of the first things people pick up any way.
However, if you have to recall which of the words in the app uses the tone of the character and which the actual tone used in this particular word, then it’s an issue.

Update: in the traditional prompt for 说一千道一万, it is asked for the Japanese writing of 说

Here’s a mistake I guess. Instead of 拉 it must be 落.

I also see another item exists on Skritter for 丢三落四 as well.
It looks like either is accepted!