Some of us like to see things from different perspectives to help learn new things. I personally think that being able to use the Wubi Input Method for writing helps me think about the different group of strokes in a character. I then would like to open the discussion, hear what you all think. 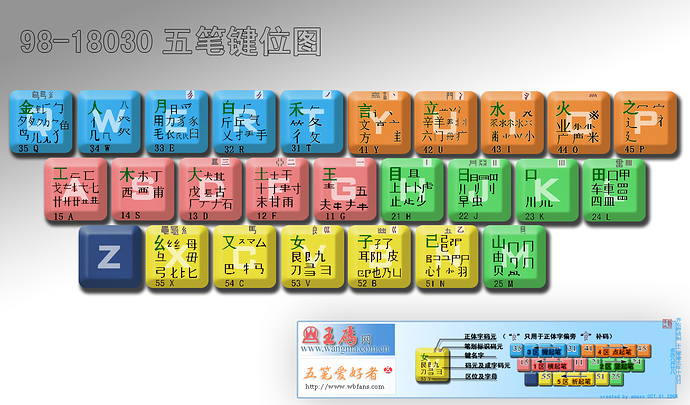 I’m not afraid of learning keyboard layouts, as I currently use a few without too much trouble (Dvorak, a niche Swedish version of Dvorak, and standard Qwerty). However, for me personally, I don’t think I type enough in Chinese to make it worthwhile. I also have a nagging feeling that it won’t be as good as I think it might be.

Something I’ve been meaning to research but haven’t is how these input methods deal with characters that have no obvious breakdowns? And how do they compare to each other? I’ve heard that Wubi is easier to learn than, say, Cangjie, but for a while I thought Wubi was only for simplified (although that’s clearly not the case). There are others! If typing in both simplified and traditional, this would be quite tedious, as the same character would typed differently.

A final reflection is that typing in Pinyin has some other benefits apart from typing speed. You do reinforce how words are pronounced when you type, for example, and it can be argued that knowing that is more important than being able to remember the components of each character. Obviously, that will vary from learner to learner, I just want to point out that different systems reinforce different aspects of the language.

Obviously a lot of things to discuss here, it would be interesting to hear what everybody thinks, especially if anyone has actually gone through the trouble of learning a non-phonetic input method!

Is there a way to set this up on a regular keyboard. Can the method be imported/downloaded?

Yes, although I don’t know how to do it on Windows or Mac (the input method I use in Ubuntu has Wubi built-in).

Ah, I think you meant if this requires specific hardware? Then no, as you can see from the picture in the original post, it’s just another keyboard layout. There are special machines stenographers use in China. One I read up on a while back is called 亞偉速錄 (link goes to Wikipedia). That one is phonetic though, as you can see, and probably not very user-friendly at all. Interesting, but not very useful for language learners.

In a Mac it is preinstalled, you just need to activate it as the input source Wubi Xing

Would be cool for mobile also, but only input methods I have are pinyin (simp & trad) and handwriting.

I know some of my friends in Taiwan/mainland use mobile input methods that seem through glancing at them to incorporate component entry method, but I’m not sure what they use or how exactly they work.

I use Stroke with Shuangpin - Simplified on my phone

Are you sure it’s not just good old Zhuyin? That’s the standard after all, both on phones and computers.

Options are rather limited when language is English on the phone. If you switch phone to Chinese mode you should get more to choose from

Sorry, I was a bit unclear, but my comment about Zhuyin was meant to be answer to this bit. If someone is unfamiliar with Zhuyin, it might look like a component-based input method, while it is actually phonetic.

I know some of my friends in Taiwan/mainland use mobile input methods that seem through glancing at them to incorporate component entry method, but I’m not sure what they use or how exactly they work.

Saw someone on Stack Chinese post this site, which might be interesting to some of you: 我爱五笔网

Ah yes, zhuyinfuhao 注音符號, I know it by it’s more childish term bopomofo ㄅㄆㄇㄈ . You are right, that is a phonetic system.

It explains why I sometimes find my Chinese friends - to my delight/relief - making mistakes with their components. When I’m puzzled and look up the compound word, I find it doesn’t exist - because they have inputted the wrong component for one of the same-sound characters.

It’s nice to know even the best get it wrong sometimes.