A new beta is out on Android and is “waiting for review” on Apple at the time of writing this post. Here’s what’s in the build, some notes on what to test for, and what to expect in the next few days! 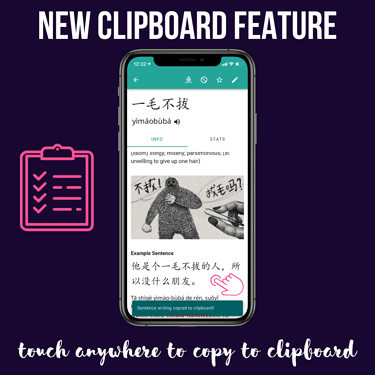 What to keep an eye out for & test

Big question is… does it get triggered too much on accident?!? Let us know!

As items are studied and learned on the Skritter website and Skritter mobile apps they get associated with a deck or decks. If you’ve already learned an item from another deck, we don’t usually force you to re-study it, but the new app also doesn’t scan the entire deck in the same way Skritter.com or legacy apps do when you press the plus button or automatically add a word. So, these items you’ve learned don’t get mapped to the new deck that they appear in (only the original) in the same way.

It’s much more efficient this way, but it can cause some problems. So, we’re addressing the issue in the patch. Not adding this update can actually have some pretty serious consequences. If, for example, you learn all the HSK 1-6 words from the HSK decks, but then suddenly delete or remove those decks from your account you would actually “lose” all those items until you relearned them again in other decks. NO FUN!

So, our solution is to have items you’ve learned in another deck on your account show an outline of a circle rather than a full circle until you’ve learned them in the current deck too (or skipped them via “mark as learned”). This means you will also now have the option of learning items again in the context of a specific deck if you’d like to.

In the next build or two, we’ll also introduce a popup that triggers when you press the Learn and we detect that you have items in this state. The dialogue will allow you to mark everything as learned in one go immediately or learn them the same way you would a brand-new item in the deck. We’ll also have the option to do the same thing at any time via the Deck Options menu.

Thanks for your patience while this addition gets included. If you don’t like the flow, please revert back to production build 3.5.1 until we get this check and notification into the app.

What will happen when I re-learn an item in a different deck? Will the “reviewing from” deck change for that item? Because as I understand it every item that I have learned has one “reviewing from” deck associated with it. For example, in my case, I am learning words from a HSK deck, and from time to time I will run into some words that I have already learned in a different deck, so if I re-learn it inside the HSK deck, will I now be reviewing it from it? That actually could be helpful to me, because right now I don’t think there is a way to change the specific “reviewing from” deck for a given item without deleting decks or sections.

Should give you option to review from either deck moving forward and clear the item for the day from either one of them.

I haven’t done extensive testing on this flow. I’m am a global due card kinda guy. But, that is the expected result that we all can test for.

Just found a fun copy to clipboard bug if you’re trying to go from Pleco to Skritter or something like that. Opened an issue on it, and we’ll get it patched up!

When editing a definition, every time I tap somewhere to place the cursor, the definition is copied automatically. Not sure if it’s supposed to be this way, but it’s annoying when I’m trying to paste something from a different app like Pleco, because what I copied there is replaced immediately when tapping in the definition box.

Yup! I see it too. Fun one. It’ll be fixed in the next build.

Clipboard bug is fixed in the latest build 300435, which is now out!

In the next build or two, we’ll also introduce a popup that triggers when you press the Learn and we detect that you have items in this state. The dialogue will allow you to mark everything as learned in one go immediately or learn them the same way you would a brand-new item in the deck.

Thanks, now that I understand it (sorry for panic in earlier posts, will check here first in future) I can see this will be a very useful feature.

Sometimes I would like an opportunity to “relearn” memory-fuzzy words from very old lists; it is cool we are now able to do this, and a future option to group-add them if will be great.

Curious: how will this affect stats on the relearned word?

Curious: how will this affect stats on the relearned word?

It won’t actually change the stats at all in the global queue, but it will allow you to better filter review items by deck moving forward.

Now, those due items could be cleared from either deck. Before, you could only clear from first learned deck (if you’re only using the newer apps).

The learn vs. unlearned stuff is really only happening at the deck level. So, this does allow you to make full-use of the “Learned only” option in Test activities.

Thanks for your patience on this build. The new beta is out and you can now rejuvenate and refresh your study decks on Skritter mobile

(read, bypass learning items again if you so choose).

The beta includes a deck-level alert for items that have been learned in other study decks along with Rejuvenate support for both decks and individual deck sections and a few other fixes and improvements.

Included with this update, you’ll also notice that deck section progress is no longer 100% if you haven’t actually studied items in that particular deck. This is by design, and this is to give you total control, and the status of a deck’s progress as it really is. So, if you wanna see that bar maxed out (assuming you’ve studied all the items), tap the Rejuvenate button and Skritter will do its thing.

full notes for the build include the following:

Learn a bit more about Rejuvenation, and see the flow here:

As items are studied and learned on the Skritter website and Skritter mobile apps they get associated with a deck or decks, which can be viewed from the STATS t

Very happy with the new changes. I like being able to give semi-remembered words another run-through.

Only wish here is that rejuvenation wasn’t quite so slow. Understand the need for accuracy in syncing, but it takes a little longer than expected.

Glad you’re enjoying it! We might be able to speed things up in the future as we continue to optimize things, but we’re not prioritizing it at the moment since those kinds of improvements can be a slippery slope in the land of endless time sucks

Hey Skritter team, just getting to know the 3.5.2 (300442) build as it’s just been applied to my iOS app. A few comments/questions follow, including ones that aren’t directly tied to this build (didn’t know where else to put them):

Anyway, thank you for reading this far. Always appreciate how connected to the user base Skritter devs are!

I seem to be running into a bug where a newly learned word (i.e. completely new) ends up as a “semi-learned” word, and I have to run the rejuvenation function to get it to show as fully learned (in the deck I learned it from).

Happens both through adding a single word & through the learn button on deck sections.
Running 3.5.3 (300443)

Deck scrolling is definitely a huge priority for me: too much time to scroll, and completely losing your place if you check a deck out and having to start over.

Deck pinning a good idea too.

Any chance you could take a screen recording of the issue you’re seeing, or list the steps you take to reproduce the issue so we can look into it? Also, does the character remain partially marked after you leave the deck and go back in?

Would love to hunt this one down and fix it up!

I saw it once today when studying, but I have yet to reproduce. Thinking maybe it has to do with adding new items to a deck section or something?

Hmm,
Just now I was unable to reproduce the bug…

Yes, the character would be partially marked until I manually ran rejuvenation.

I saw the same thing on a fresh deck section I was adding words to. I’ll keep an eye out for sure!

Hi is there a way to turn the rejuvenation feature off and have my decks go back to how they were before?

Currently I have a lot of decks that now no longer show the percentage of words studied, but if I rejuvenate, it takes a really long time. That would be fine if it does it in the background, but as soon as my phone screen turns off, the app stops rejuvenating, so I have to sit by my phone ensuring the screen stays on while it works, and it’s taking up a lot of time.

Hi is there a way to turn the rejuvenation feature off and have my decks go back to how they were before?

How many decks do you study from in a day? We don’t have plans to go back to the previous way that things were working, but we are going to be making list progress more clear in upcoming builds (such as showing your estimated progress based on all vocabs on the app), and other bits of info. Would this help? Or, are you running into a larger issue in your study flow?

We’ll continue to optimize the speed of the feature, but this is mostly a safety measure to ensure that terrible things don’t happen to your account if you ever press “delete” on a deck you’re studying from. I found out the hard way what can happen if we don’t have this in the app, btw.

In previous versions, it showed things as “learned” in a deck, even if you didn’t actually study them yet, and it was a bit misleading, and we’d like to avoid mishaps that are hard to reverse.

Will talk with @josh about ways to further optimize things.

Appreciate the feedback from you and others on this new feature. We’ll keep tuning things!