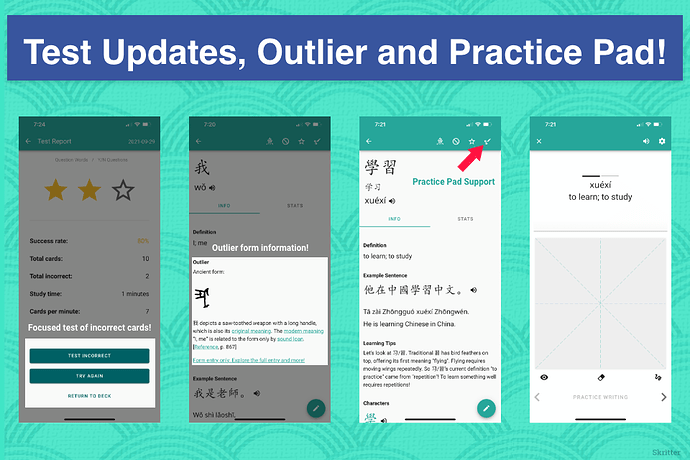 The 3.7.0 beta is out for testing, and we’re super excited about some of the features and improvements in these builds. We’re working on some final polish before this goes to production, but here are some things to be on the lookout for!

A note on Outlier data. We’re thrilled to have the Outlier data as a part of Skritter’s info screen. This data is provided generously by our good friends John and Ash at Outlier Linguistics 100% free during this trial-run period.

You can show your support for this partnership by clicking the links in the app and checking out their amazing courses on Chinese Characters, Mandarin Pronunciation, and by purchasing their full dictionaries (currently accessible in Pleco, which we have integration with) directly from their website.

It is our hope that we can also support the purchase of Essentials and Expert additions of their dictionary in-app in the future. In the meantime, enjoy these amazing entries for 3000 commonly used Chinese characters!

This is great! I’m a pretty casual learner, but Skritter is definitely my number one Mandarin companion these days. I think you read my mind introducing the “test incorrect” and “practice pad” features. And with “Outlier” data too, I suppose–though previously I only knew of hanziyuan for etymology. And by previously I mean a couple weeks, and only just today I used it for the first time after noticing Iona’s tattoo. As far as etymology goes, I’m personally more interested in pictures!

Thanks for the hard work!

Welcome to the forum!

Outlier Dictionary entries do include some ancient form SVGs that are really cool, but they’re not on every entry.

If you haven’t done so already, consider checking out the Chinese Character Course in-app.

Thanks for the kind words and happy skrittering!

Any progress on getting the crashes resolved? They are happening daily now.

Also: TestFlight says “developer has removed you from the testing program,” so I can’t access. Reason for this?

Have you tried turning off auto-advance yet? Please try that off so we can try and isolate the bug. @mrclwlf has reported no issues since doing that, and we’d love to see if that helps. If not, keep the emails coming and working with Josh.

I’ve checked out your Chinese Character Course–some great insights about characters in there! I’ll offer some other feedback, though: In-app, the embedded videos stay in portrait mode on my phone even fullscreened, and display auto-turn-off remains enabled leading to a locked screen mid-video. This is on an Asus ROG phone II running Android 10.

Actually, on further investigation the very first Character Course video behaves as expected. Note that on this screen, one may freely rotate into landscape and back. Fullscreen video rotates properly as well.

edit: I didn’t realize that I could watch these videos through the website by clicking through to the deck while logged in on the website! This works great, I prefer desktop video watching!

I’ll turn off auto-advance and report back after a few days if that fixes it.

Thanks for the link to rejoin TestFlight.

@kstrikis thanks for the report! I think we’ve got the orientation issue patched up and it’ll be included in the next version.

Josh, great! Awesome you’re so quick with that fix.

Sorry guys, I just can’t work with auto advance turned off, it is far too tedious over hundreds of cards. I’m going to assume that would fix it and go back to accepting crashes until a final fix is found. Good luck!

@Therebackagain Roger. It would be awesome to know if turning it off (even for a single day of studying) kills the bug, but one thing that would be super helpful for digging deeper into the crashes regardless of that would be a screen recording of an entire Skritter session as it happens.

Screen recordings on Apple are super easy to do. A step-by-step guide to set this up can be found on Apple Support outlines the process here.

Note, we don’t need a microphone enabled, just a video of you studying would be greatly appreciated.

The video file will likely be too large for an email attachment, but an upload to Dropbox, Google Drive. or some other cloud storage sharing options would help accelerate our ability to find and fix this issue.

If you or anyone else seeing this bug is willing, here’s what would be helpful for tracking this down

That way @josh and I can watch the video with a fine-tooth comb and see if anything jumps out as us that we’re missing when testing the app for this crash/bug on our end.

Here’s what’s in the build:

I just sent a link for a screen recording via the feedback option inside the app. Hope it helps.

FWIW, I have auto advance turned off all the time, and I experience these crashes daily as well.

FWIW, I have auto advance turned off all the time, and I experience these crashes daily as well.

Thanks for the video! @Therebackagain are you on raw squigs as well? That’s another thing I can try testing more!

Would love to get to the bottom of this pesky bug.

Ok, I’m willing to do the video. Will get back to you within the week once I clear up some time.

(Speaking of raw squigs, are you ever going to bring back strokes floating into correct position and order the way legacy does it? That was both cool and useful.)

This build targets the NaN% canvas crash reports we’ve been getting.

So far so good

I can’t do a single card now after this update. Has anyone else had similar issues?

@Oscariscar it sounds like based on our email correspondence that your issue was specific to raw squigs with stylus and that it might have be related to your specific stylus.