Blank writing canvas after going back

I’m noticing that more than half of the time when I hit the back button to go back to a writing canvas, that it comes up completely blank but correctly graded. This happened infrequently with the previous versions of the app, but currently it is very pervasive as you can see in the screen below.

Edit: I have the auto advance set on a half second, which is way too fast for me often, but one second is way too slow. I’d really love a 3/4 of a second or some adjustable time that I could set myself. Regardless, I end up going “back” frequently enough that this behavior is extremely annoying. 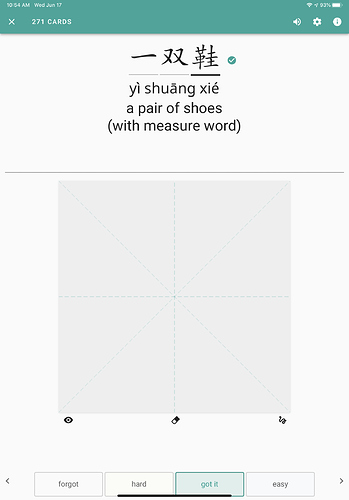 @Apomixis I am able to reproduce with auto advance on. Opening a ticket to get it patched up.

Unrelated to the bug, but have you ever thought about disabling auto-advance? In the eight years I’ve been using Skritter I’ve never turned it on for my account. I find tapping the canvas (or below the divider line on other cards) sufficiently fast for submitting “got it” grade on correct cards, and I never have to use the back button in the event that I want to change the grade. 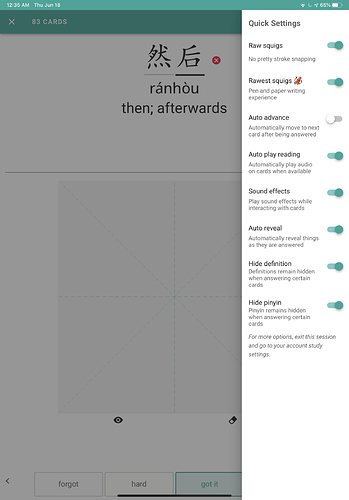 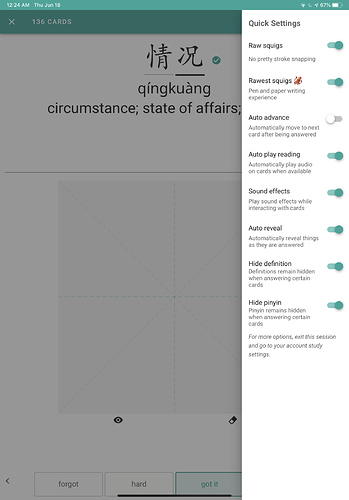 Yeah, bug is unrelated to auto advance. Should have it patched up in the next build!

Also, I opened an improvement to add more degrees of auto advance control in the future. That’ll be a little down the road, but we’ll provide more options!

Today’s beta really helps with this issue. I still see, periodically, going back will result in the colors of the grading button and often tone cards having the drawn tones change to look like black ink rather than Grade colored, BUT the blank canvas is gone!

If you can figure out a way to reproduce the issue you’re describing I’d love to get that patched up. I just messed around for a bit and haven’t see it yet. Will keep an eye out for sure.

@SkritterJake It is very intermittent, and I’ve never been able to reproduce it on demand…so no reproduction steps. Would screenshots of the issue be of any use?

@SkritterJake After much trial and error, I was able to create reproduction steps for one of the visual bugs that I’ve seen. Part of it may be that I use an Apple Pencil on iPad exclusively for Skritter. And when using the Apple Pencil on the iPad surface, periodically, if you are writing quickly the Apple Pencil will bounce/skip along the surface. Additionally, since the distance from the writing canvas to the grading/check-answer buttons at the bottom of the portrait iPad screen is really really large, the usability makes it so you overreach when you’re trying to move around on the iPad screen. So sometimes when you intend to make a continuous line, but are writing very very quickly the pencil tip will bounce along the iPad surface causing multiple hits along the screen. This can lead to weird results in Skritter, as an example, the bug below:

On a 2 character prompt

Intent: Try to swipe up to clear, but INSTEAD accidentally (due to bouncing and moving too far down on the screen)

Swipe up to clear 1st char

Pick OK and wait to autoadvance

Note: The action of trying to swipe up to clear the screen, but accidentally bouncing along the screen, causing havoc by mis-hitting buttons and causing taps on the screen that cause character-advance, happened to me pretty often.

Edit: I was also able to duplicate this on an iPhone XR using the same beta. It was a little bit harder because with my finger, when I tap the screen of Skritter, it doesn’t immediately create a little mark in the writing canvas, which is unlike how the Apple Pencil works on an iPad. You may have to draw a short line instead of just making a dot.

I’ve included a screenshot of what the bug appears like on both devices. First on iPad, You can see I’m on the 2nd char, but seeing the previous overlay of the first char. The second pic is from my iPhone: 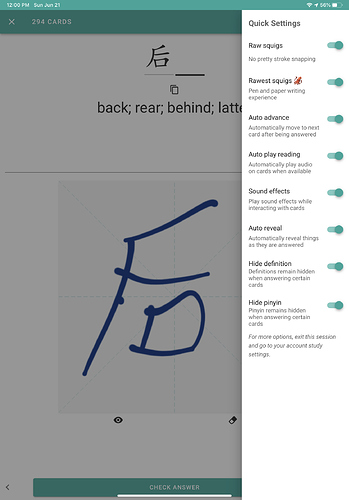 With Rawest Squigs turned on:

On a two character prompt write the first character, and then hit the forward button without pressing the check answer button. The character will advance to the next character. Now hit the back button and you’ll see the 1st character has been graded green, but appears with black drawing ink… Hitting the green “got it” grading button does not change the characters Ink anymore at this point. (1st image)

In fact, you can select other grading Buttons and the black ink vanishes and you get “faded” colored ink (2nd image) that will fade to a blank canvas 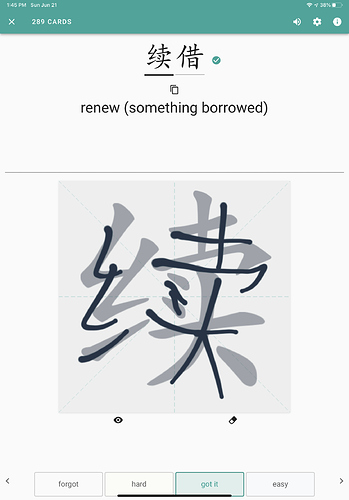 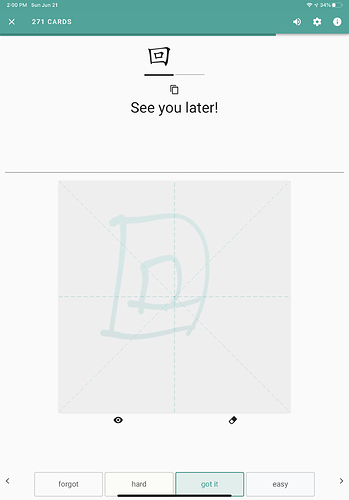 Somewhere in this queue I usually will see one of the other older writing prompts appear with black ink instead of the colored ink ink. Usually it only happens while hitting the back button, and then hitting the forward button shows everything with the correct colors.

However every once in a while the forward button will show something in black ink too.

This appears to be the hardest bug to get to appear, but I can do it pretty consistently on my iPad. 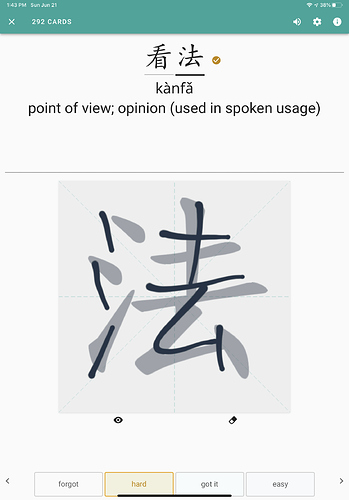 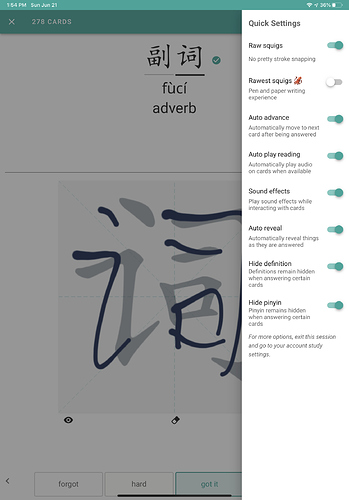 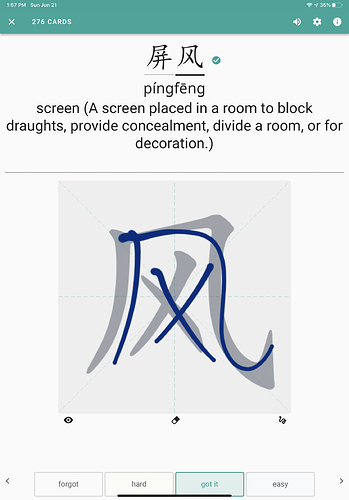 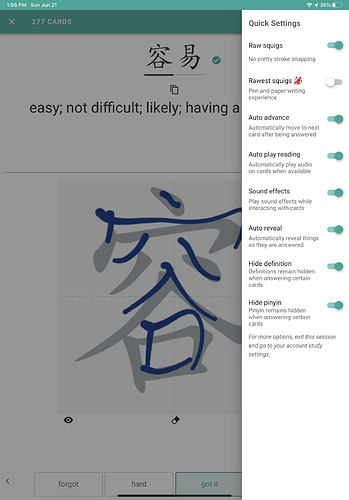 @SkritterJake. On the latest beta, I have not been able to get the tone-prompts to misbehave (color-wise). Perhaps that was fixed.

I’m unfortunately not able to reproduce the bug with the first character showing up in the second character area. I see you’re able to do this based on your screenshots, however I’m not running into this by following your exact steps and with the same settings (though I don’t own an iPad Pro or iPhone XR)

@Jeremy I’ll have access to some additional Apple devices this weekend and can see if it duplicates on these. What device type are you using for your verification?

Is it possible what I’m seeing is related to my specific account content? Is it technically possible to point the Debugging/development environment at a user’s account? Or to duplicate an account into a dev sandbox outside of production?

Hey there Apomixix. I was able to recreate the issue of tapping foward on a character without checking the grade, and then going back to it, at which point the grade buttons causes the ink to fade out, however, I don’t quite understand the skipping of the Apple pencil, and why it would create unwanted marks.

Do you use a screen protector? Is the nib of the apple pencil worn down? Perhaps you could film yourself on your phone writing so we can try and work out the issue.

Finally, it seems like you’re hitting the back button several times during a session to go back several cards. Is there a reason why you do this during your study habbits?

@Jeremy @SkritterJake I tried recreating the bugs on a variety of iOS devices…and got an older iPad and two older variants of older iOS in addition to newer devices/iOS combos.

The bugs were demonstrable on all of them.

So, I found it easy to duplicate. The 3rd bug I reported may only occur after the first one happens…side effect of some type.

If you wanted to see it, we can set up a concall next week and I can demonstrate it.

Here are the devices I showed the bugs on:

The hard Apple Pencil tip on a hard iPad screen are both rigid Materials. They inherently “bounce” like pool balls when they collide. I don’t use a screen protector.

Skritter makes you move around the screen a lot, and if you try to “Skritter” really quickly, the Pencil is more likely to bounce the quicker and the more shallow of an angle you use when you write on the screen.

If I were to slow down and write more slowly, it wouldn’t be an issue, but needing to tap in very-spread-apart screen locations “trains” one to move quickly.

The previous discussion was really my attempt to try to point out that the software usability on an iPad and with an Apple Pencil is somewhat different for Skritter than it is when using a small screen on an iPhone and a finger. The mechanics of the usability have slightly different “calibration needs”.

Edit: This “long-distance” problem is magnified by “portrait” mode being the only available mode on an iPad. On my iPad, the distance from the top of the “writing box” to the “check answer bar” is 7 inches…the same length nearly as the entire case for my iPhoneXR.

Edit 2: Here are a couple screenshots showing the pencil bouncing a bit as I draw quickly. Note the gap on the right side of the outer 门, and then the skip on the top right of the upper 夕. Writing quickly (less than a second per each sub-character in the overall character) and the need to lift the pencil and reposition can cause some bounce. Yeah, I should slow down… With regular and raw squigs on, the strokes don’t get accepted, so I was frustrated by so many times I write, having Skritter tell me my stroke was incorrect. With rawest squigs, I can now see my stroke and decide if it’s good enough…I don’t care about my writing being pretty. ( I am not a calligrapher). I want to recognize it when reading and be able to type the char into the handwriting recognizer of my iPhone…they are extremely forgiving of sloppy writing! So, frequently I’ll write something, check it, tap to advance, and then decide I should rewrite it a bit neater…hence I use the back button frequently…by the time my mind has decided to reassess the character, my muscle-memory has already tapped the screen and caused the character to advance. 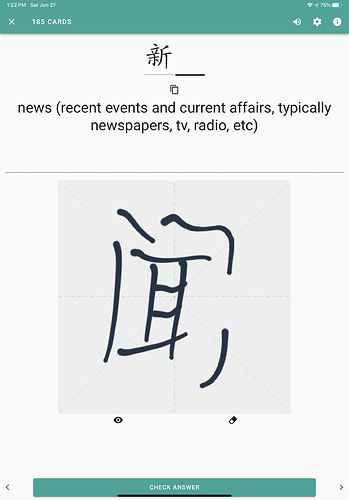 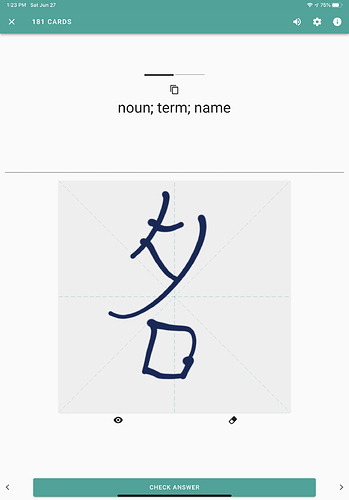 I’m also able to duplicate the first bug regardless of:

Rawest squigs turned “on” so you can draw anything and move between chars.

On a 2 character prompt (works even if it’s very first one of a session, so find one and mark it RED and then exit the session and close down Skritter app, restart and the character will be first on next review session).

Draw anything on first of two chars

tap inside drawing box on screen to advance

Draw anything on 2nd char (but do not press Check answer)

I reduplicate and get this bug every time on any Apple iOS device on any version of iOS I’ve tried it with.

Below are my full settings.

So, it’s either my specific account that’s wonky, or a bug…but you don’t see it at all? 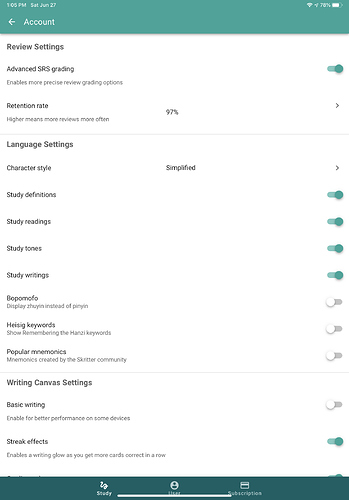 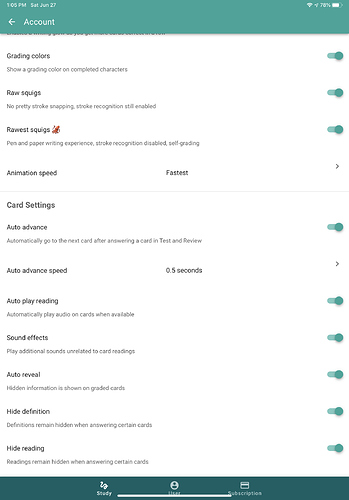 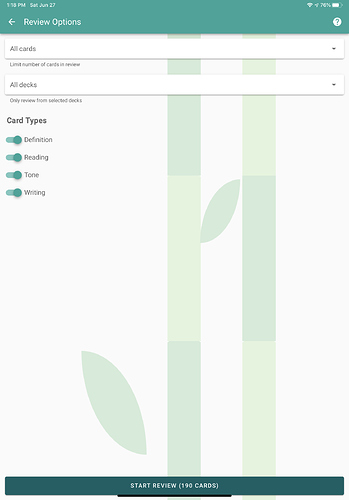 I was able to recreate this issue following your steps, and I’ve now logged 2 of the issues in our system so that they can be tackled in due course; the one with the faded colors after grading, and this one where the previously drawn image populates the second canvas space (although I found simply swiping up to erase got rid of this issue, so it’s tagged as an improvement rather than a bug).

P.s, here is a video of me drawing quickly on the iPad, trying to create the “skipping” issue you have. My advice is to either get a paper-like screen protector, or just a cheap anti-glare one which improves the writing experience on your iPad no end.