What exactly do 'Characters' and 'Words' on the stats page represent?

I hit 1000 words on skritter today! I was super excited to finally reach this benchmark and I’m really excited to continue on in my language learning journey. I noticed something odd though when I made it to 999. I thought ‘I’ll just learn a word with a character I don’t know in it and that’ll push me over the line’. So I learned 成功 because I didn’t know 功 quite yet, and I thought it was an apt word to be my 1000th

. But when I checked my progress again I still only had 999 learned. So I learned another word: 好处 (again it felt apt) because I didn’t know 处 yet and it sat at 999 still. I tried with a couple different words until I thought maybe I had to learn a single character word to push me over. I decided to learn 穷 (keeping with the theme) and that did it!

That made me wonder about what ‘Characters’ and ‘words’ on the stats page actually mean. I exported my words data on the site and through together a very quick and dirty python script to check and see how many individually unique characters I learned and I was surprised to see that the number came up to 1118 and not 1000! Unique words (be it 1 or many characters) came out to 892, much smaller than the 1132 it shows on the stats page. In my script, ‘words’ were considered individual study items in the app (办法 would be a word) while characters were just the single units (办法 would be 2 characters).

There could be some errors in my program but I was just curious at this point what the Skritter team’s method was for counting these two stats. Thanks! 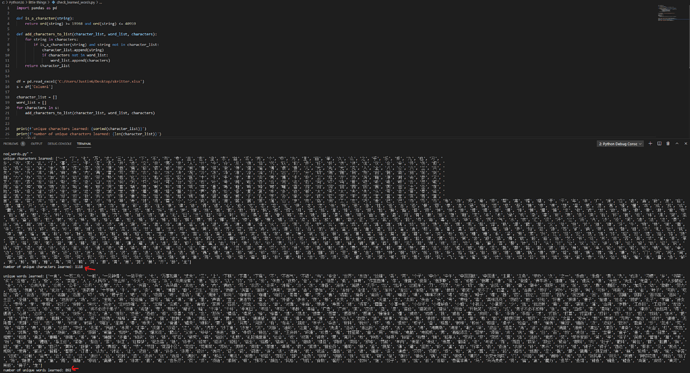 What does the “characters learned” metric mean? I had thought it was a running total of the cumulative “characters” I have been exposed to. However, this week, I finished a book I was learning from and the resource said that it exposed me to over 700 characters. However, my Skritter metrics say about 448 characters in total. I thought that was odd, so I exported my Skritter lists for that resource, and 15 minutes of Matlab programming later, had a “unique character count” of 812 characters f…

Thanks for showing me this, I’m glad others are also asking! Hopefully we can get some kind of resolution to this soon.